We have ‘no doubt’ India was behind PSX attack, says PM Imran in NA 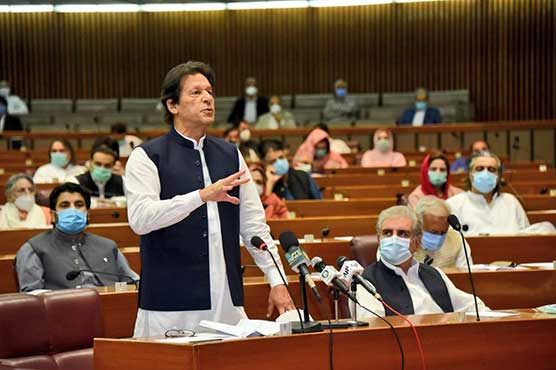 Prime Minister Imran Khan while speaking in the National Assembly on Tuesday said that Pakistan has “no doubt” that India was behind yesterday’s attempted attack on the Pakistan Stock Exchange in Karachi.

Prime Minister Imran Khan while speaking in the National Assembly on Tuesday said that Pakistan has “no doubt” that India was behind yesterday’s attempted attack on the Pakistan Stock Exchange in Karachi.

“What happened in Mumbai, they wanted to do the same [in Karachi]; they wanted to spread uncertainty. We have no doubt this was done by India,” the premier said, referring to the 2008 Mumbai attacks in which more than 160 people were killed.

He praised a police sub-inspector and three security guards who lost their lives while thwarting the attack on the PSX as the “heroes of Pakistan”.

“They gave sacrifices and thwarted a major incident, which was planned by India to destabilise us,” he said, adding that the attackers had a lot of ammunition and they wanted to take hostages.

“My cabinet and its ministers know that all our agencies were on high alert. Our agencies preempted at least four major attempts of terrorism and two of them were around Islamabad.

“We were fully prepared … this was a huge win for us,” he said, paying tribute to the security agencies.

The PSX had come under attack on Monday morning when four heavily armed assailants lobbed grenades at its entrance and opened fire on security guards and officials before being killed in an exchange of fire that also claimed the lives of four security personnel.

The outlawed Balochistan Liberation Army (BLA) claimed responsibility through social media, but such an attack reflecting “frustration” of Indian agency RAW over peace in Pakistan’s financial hub was not possible without the help of any foreign hostile agency, the chief of paramilitary Rangers told a press conference after the attack.

At the start of his speech, the prime minister thanked his team for their efforts which led to the budget 2020-21 being approved by the parliament on Monday.

“There was a lot of speculation that a lot could happen … if you had watched TV you would have thought it was our last day,” he said, referring to fears the budget would be unable to be passed.

“I want to thank my government, because Chief Whip Amir Dogar gave me full information [about] what we gained and what improvement we had. I also thank my minorities and the way they participated,” the premier said.

Prime Minister Imran said he and his finance team know “what a difficult budget this was” and the government had to revise its revenue target from Rs5,000 billion to Rs4,900 billion.

“We were on our way [and] we had 17 per cent collection but as soon as Covid-19 came, it affected all the economies, so a direct consequence was that our target had to be revised to Rs3,900 billion [and] we had a Rs1 trillion shortfall.”

He said no country, including Pakistan, had been able to measure the impact the coronavirus lockdown would have on the economy.

“I salute my team, who were criticised for being ‘confused’, because we did not go for a sweeping lockdown that we were being pressured into enforcing.

“They gave us examples of Sindh … if I was listened to, I would still not have enforced the lockdown that we did. I would have tried to keep things running.”

He said while the opposition was criticising him, people travelling to poor neighbourhoods in cars were being “attacked” by people who were hungry. “Thank goodness we didn’t succumb to the pressure; the world has accepted that smart lockdowns are the only way to combat the virus,” he added.

Imran said the real “confusion” was among the poor people who weren’t sure how they would feed their families during the lockdown. At this point, he lauded his aide on social protection Sania Nishtar and her team for distributing emergency cash among the people, saying there was “no other example of this” in a country with an informal economy.

‘Not out of the woods’

Due to the pandemic, the premier noted, the entire service sector is affected, the northern areas that rely on tourism are struggling and teachers in rural areas are without job. He said the government was planning on how to further help them because the country is “not out of the woods” yet.

He said despite the unfavourable economic conditions, Pakistan was “saved” because the government opted against completely closing down the agriculture sector.

But he said, “We still have a challenge going forward; we don’t know when our tax collection will gain and how we will help those affected, but it will be a constant challenge on how to sustain the economy.”

Invoking Charles Dickens, the prime minister said: “It is ‘the worst of times’, but if we want to make it into the best of times we have to plan.”

But he said the money that should be spent on education and hospitals is being poured into government corporations running losses, while the power sector has become “the biggest curse” for the country. He held “mafias” responsible for bringing state-owned enterprises to this stage and for the Pakistan International Airlines’ current woes.

“It is not an option now … we need to reform all institutions,” he said, recalling that his government had to pay Rs2,000 billion out of its first-year tax revenue of Rs4,000 billion in interest payments for loans taken by previous governments.

“The people who ruined the Steel Mills, PIA and power sector by making political appointments ask why [we] fired people,” the premier added.