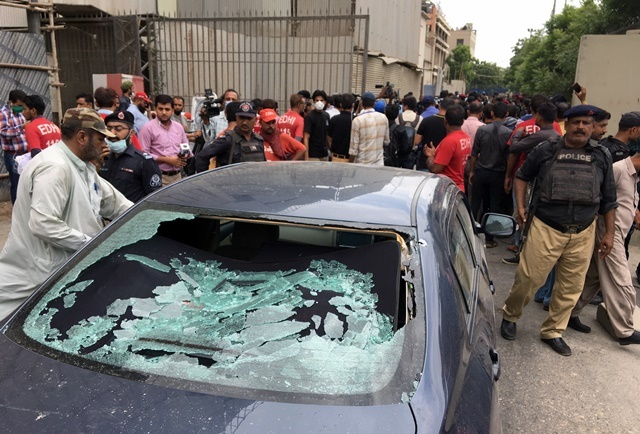 KARACHI:  Security forces has foiled the terrorist attack on Pakistan Stock Exchange (PSX) in Karachi on Monday and killed all four BLA Militants. A police official and three security guards were martyred and seven people including three policemen got injured in exchange of firing during the operation against militants in Pakistan stock exchange. The India-linked Balochistan Liberation Army (BLA).claimed the responsibility of attack on Pakistan Stock Exchange (PSX) building.

Claiming responsibility, BLA also issued the list of the terrorists involved in attack. Members included, Tasleem Baloch, Shehzad Baloch, Salman Hammal and Siraj Kungur attacked on PSX and they all killed in operation. These militants belongs to the Majeed Brigade of BLA.

According to a senior police official, four militants had arrived in a sedan and attempted to storm the PSX compound from its parking side while indiscriminately firing and lobbing grenades.

The attackers, armed with grenades and automatic rifles, launched the attack and attempted to enter the PSX compound, which is in a high-security zone that also houses the head offices of several banks.

Security personnel, including police and Rangers, intercepted the attackers and killed all four of them, Sindh Rangers said. A clearance operation was conducted later.

Police officials said that advanced weaponry, hand grenades and explosive material was recovered from the terrorists’ custody. Officials of the Bomb Disposal Unit also arrived at the scene of the attack and scoured the site, including a “suspected car” parked outside PSX that may have been used by the terrorists, for any explosive material.

Sindh Rapid response Force (SRF) soldiers and the security guards has killed the militants who attacked on PSX, a police official said.

An Additional IG of Police confirmed that four were killed and attack had been “successfully thwarted”,

Counter-Terrorism Department (CTD) In-charge Raja Umar Khatab said that the terrorists had planned for a long fight as a part of their mission.

According to Khatab, they did not find any suicide jackets on the terrorists and their mission was not to return alive during the attack. He added that the items seized from terrorist’s had water and edibles on them.

DG Rangers Omer Ahmed Bukhari, said that terrorists were eliminated within eight minutes. He told reporters that the attackers arrived at the scene in a car at 10:02am and they were killed by security forces by 10:10am.

Once the attackers were killed, security personnel carried out a clearance operation and normalcy was restored to the area within 30-35 minutes.

He said that the terrorists had planned a long assault that included bloodshed and holding people inside the building hostage. All the attackers were equipped with AK47s, hand grenades and food.

The DG said that a tweet had been posted in which the attack has been attributed to the Balochistan Liberation Army outfit, adding that a final statement on it will be issued after investigation.

To a question, the DG Rangers acknowledged that the attack bore similarities to an attack on the Chinese consulate in Karachi that was carried out by BLA militants in 2018.

Omer Bukhari said that the possibility of the involvement of foreign agencies, especially India’s Research and Analysis Wing, cannot be ruled out, saying that such attacks are not “stand-alone incidents” and cannot take place without the aid of “outside intelligence agencies”.

“Straightaway, I can assure you that this terrorist incident cannot have taken place without the help of an outside agency. And among them, RAW’s frustration is apparent to all of you,” he said.

To another question, Bukhari denied the suggestion that the attack represented an intelligence failure, adding that security forces’ response was “in place” and the militants “could not achieve any of their motives”.

Karachi Police Chief Ghulam Nabi Memon also backed Bukhari’s statement, saying that since the attack on Chinese consulate, there have been other attempts that were foiled by security agencies. He said that it was a triumph for the country’s security forces as they had responded promptly and thwarted the motives of the attackers.

“We were prepared when they came, we had a good response, we had good coordination with intelligence,” he said.

DG Rangers said that the militants may have wanted to show that they have the ability to target high-profile places but they had been humiliated because they were eliminated within minutes.

An Indian Information Technology (IT) expert Rejeesh S tweet on his account that Twitter has suspend the twitter handle of HAKKAL Media which was used by BLA to claim the responsibility of Pakistan Stock Exchange terrorist attack in Karachi.

Prime Minister Imran Khan has also condemned the attack at the Pakistan Stock Exchange and lauded the security agencies for bravely fighting the attackers and successfully thwarting their attack.

PM also shared his condolences with the deceased and prayed for the successful recovery for the injured.

Army Chief stated that the security forces played a vital role to counter the terrorist attack and killed all terrorists within 8 minutes which shows the brilliant performance of Sindh Police.

Chief Minister Sindh Murad Ali Shah has condemned the incident and asked for a detailed report of the incident.

Shah said that enemies of the country want to take advantage of the situation created by the pandemic and directed all law enforcement agencies to be more vigilant. The CM also lauded the police and rangers for the quick action.

Meanwhile, Governer Sindh Imran Ismail, while the attack was ongoing, had tweeted that he had instructed the Inspector General of police and security agencies to catch the militants alive.

“We shall protect Sindh at all costs,” the governor had tweeted while condemning the attack.

Moreover, IG Sindh Police Mushtaq Mehar has announced 2 million reward for the police officials who foiled the terrorist attack at the PSX.  He said that the rapid response force personnel bravely fought with terrorist and not allow the BLA terrorist to enter in Stick exchange building. We salute to our police personnel, he said.