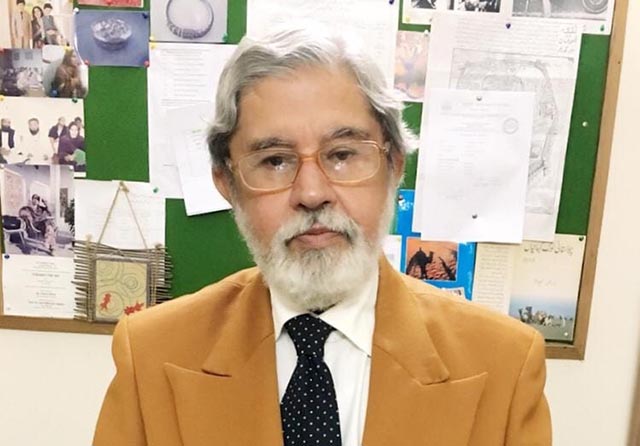 Mr. Shaukat Mughal – a Siraiki intellectual and well-established writer passed away a few weeks ago at the age of 72. He had done Masters in Urdu from Multan. He was born and brought up at Multan and spent his entire life in his family home at Pak Gate Multan (near Musa Pak shrine). His family also established ‘Siraiki Market’ (Sarafa market) at Multan. His two sons and three daughters are settled in Multan city. As an academic, he retired from Education College. He also taught Urdu at Muslim College and Legend College, Multan.

My initial meetings with him took place while I was conducting my doctoral research in the UK during 2004-2008. Based on the focus of my research, I was collecting materials related to Siraiki language and literature, meeting intellectuals and writers belonging to this area and conducting interviews. Noticing his important contributions, I had informally interviewed him and collected his important works during various literary and political events that were organized by the Siraiki activists at Multan.

The recent interactions with him took place, again, at Multan when we organized an annual event in memory of my father after 2013, where he was invited, or during my usual visits to Jhoke Newspaper office at Multan. We always ended up debating a lot of political issues related to Siraiki politics. I will never forget his last conversation with me when he said, ‘I will believe that you are a true researcher when I visit your library at home’. Unfortunately, life did not allow him to pay this visit, but I believe despite all the differences, what drew us intellectually closer was our mutual concern about preserving and promoting Siraiki heritage.

As a researcher, in my view, one of the most important contributions by him was the research that he conducted on the colonial dictionaries. Several colonial documents were published during the British rule in Punjab. Some key documents include but are not limited to the following publications: George A. Grierson, The Linguistic Survey of India (Calcutta: Office of the Superintendent of Government printing, India, 1903-22).

The following section of Grierson’s survey is dedicated entirely to Siraiki language: ‘Vol. VIII, Part I, Indo-Aryan Family, North Western Group, Specimen of Sindhi and Lahnda’ which was published in 1919; E. O’Brien, Glossary of the Multani Language Compared with Punjabi and Sindhi (Lahore: Printed at the Punjab Government Civil Secretariat Press, 1881). The original document of Linguistic Survey of India and some of these colonial documents are still available at School of Oriental and African Studies (University of London) and at the British library, London.

Mughal’s important contribution is the reprinting of these colonial dictionaries and glossaries. The republished editions of these dictionaries, edited by Mughal, are added with an introduction based on the contemporary political context of the region. These reprinted works produced by Mughal include: E. O’ Brien, Glossary of the Multani Language, ed. by Shaukat Mughal (Multan: Siraiki Adbi Board, 2002); Andrew Jukes, Siraiki English Dictionary, ed. by Shukat Mughal (Multan: Siraiki Adbi Board, 2003); Andrew Jukes, Dictionary of the Jatki or Western Punjabi, ed.

by Shaukat Mughal (Multan: Jhoke Publishers, 2003). It is significant to note that while the colonial officials had used the names of Lahnda, Jatki, Riasti, Derawali for this language, Mughal in his reprinted editions mentioned above, uses the word ‘Siraiki’ instead of the colonial names. Colonial official, Edward O’Brien’s dictionary included a ‘Map of the Country Where Multani Language is spoken’. This image is reprinted in Edward O’Brien, Glossary of the Multani Language, edited by Shaukat Mughal (Multan: Siraiki Adbi Board, 2002).

These are important documents for researchers working on Siraiki language, culture, history and identity. These are also important documents primarily for those researchers who remain in doubt about Siraiki language as a dialect of any other language as for instance clearly mentioned by George Grierson his renowned work, Linguistic Survey of India.

Reprinting these works is an important move on Mughal’s part because it reflects a postcolonial-writers’ deliberate efforts towards emphasizing the standardized name for this language, defining its territorial demarcation and establishing the case of this identity. No doubt his work is a major contribution to the Siriaki language and reflects his resistance against the colonial policies. This resistance also reflects in his work ‘Dain Samraj’ (literally translated as ‘Witch Authority’) and ‘Dain Ghulami’ (literally translated as ‘Witch Slavery’). His work is now taught as part of the Siraiki literature curriculum at university levels.

Mughal left behind a huge legacy of books related to Siraiki language and linguistics, which will always remind us of his contributions and commitment towards his motherland. He has published over sixty books in English, Urdu and Siraiki languages. He has touched upon the historical, linguistic, cultural and ethnic dimensions of Siraiki language and literature. He has compiled and translated proverbs, written travelogue about his visit to Delhi, poetry.

His dynamic research and writings remain an asset for the Siraiki history and literature and will be used vastly by the future researchers. In addition to these important contributions, Shaukat Mughal has also published some well researched works like, Siraiki Diyan Khas Awazan Di Kaharin (Multan: Jhoke Publishers, 2002); three volumes of Siraiki Akahan (Siraiki proverbs); a travelogue entitled Delhi Dhai Koh (Dehli Two and Half Miles) and several fictional, poetic, verse and research based works. While we mourn this loss, he has become immortal for all times to come and will continue to live through his well acknowledged research.

Dr. Nukhbah Taj Langah is an academic with expertise in postcolonial and South Asian resistance literature. She is a freelance translator and a political activist pursuing the rights of Siraiki people.