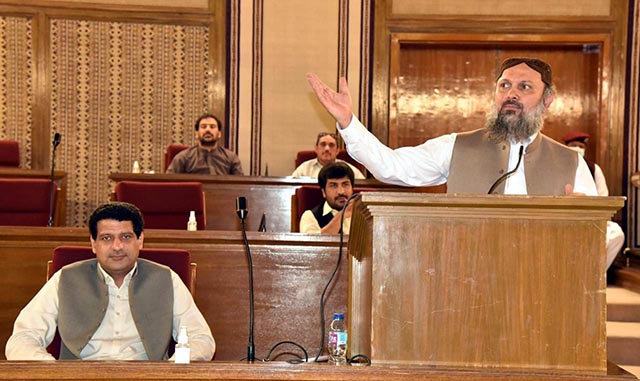 The post-budget session has been concluded during Monday’s session chaired by Speaker Abdul Qudus Bizenjo while the house unanimously approved provincial financial budget for the year of 2020-21.

Calling people of Balochistan as independent in judging the provincial budget for 2020-21 whether its public-friendly and anti-public budget CM Jam Kamal has said, incumbent government has focused on good governance, functionalization of monitoring system and a strong accountability system in Balochitstan.

“In order to expedite development process in Balochistan our government has utilized 605 million rupees out of 6.5 billion rupees out of 7 billion while many delayed schemed approved during previous regimes being complete in current regime.” CM Jam Kamal said while addressing the house during last session of post-budget debate.

However the Chief Minister has strongly condemned the terrorists’ attack on Karachi Stock Exchange added this house condemns such attacks against country’s economy expressed grief over martyrdom of security guards in the attack.

Talking on challenges his government has been facing since formation of collation government CM Jam Kamal said, we have utilized earnest efforts to foster good-governance in Balochistan plagued by irregularities and bad-governance cited the E-Filing system in provincial department in order to quash-away precedents of slow government work.

“Incumbent regime in Balochistan has been filling 6000 vacant government jobs in the province.” Jam Kamal said lauded opposition’s support in finalization of provincial budget for 2020-21.

“Record snowfall and Coronavirus pandemic diverted provincial government’s attention from development work but despite natural odds a solid planning has been made toward provincial development program.”

“Social Protection Authority is has been established in order to prevent foreign companies from purchasing a single inch land in Balochistan because we can’t protect our natural resources from uproar and emotional speeches.”

Jam Kamal slammed critics against provincial government added instead of spreading disinformation among people of Balochistan, people questioning government’s competency should talk with evident proof, “Our government discussed 390 provincial agendas in 102 cabinet meetings which was never happened in the history of Balochistan.” Jam Kamal added.

Discussing government’s efforts to uplift health sector the Chief Minister said, new hospitals being established in all districts while we have allocated 08 billion rupees for post-covid19 clarified that we didn’t approve funds for air-ambulance because the proposal yet to be discussed and finalized,

“New labs and hospitals being established across the province because people in Sindh, Punjab and KPK have been receiving quality health treatment at private-level but in Balochistan government is responsible for health services.” Jam Kamal added.

“We have been receiving budget details from June 20th which have proven that provincial government complete ignored ground public issues.” The opposition leader said.

The Speaker Mir Abdul Qudus Bizenjo has interrupted the opposition leader and said, budget debate has conclude thus no one could talk on budget 2020-21.