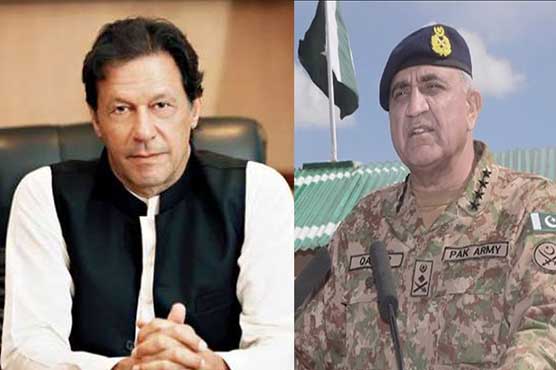 RAWALPINDI : – Prime Minister Imran Khan and Chief of Army Staff (COAS) General Qamar Javed Bajwa on Friday expressed sadness over loss of precious lives in the plane crash in Karachi which left several people dead and many others wounded.

RAWALPINDI : – Prime Minister Imran Khan and Chief of Army Staff (COAS) General Qamar Javed Bajwa on Friday expressed sadness over loss of precious lives in the plane crash in Karachi which left several people dead and many others wounded.

Prime Minister took to the social networking website twitter and expressed shock and saddened over the PIA crash.

He said that he is in touch with PIA CEO Arshad Malik, who has left for Karachi and with the rescue and relief teams on ground as this is the priority right now.

Shocked & saddened by the PIA crash. Am in touch with PIA CEO Arshad Malik, who has left for Karachi & with the rescue & relief teams on ground as this is the priority right now. Immediate inquiry will be instituted. Prayers & condolences go to families of the deceased.

The prime minister further said that immediate inquiry will be instituted. He also convoyed prayers and condolences go to families of the deceased.

On the other hand, in a statement issued by the Inter-Services Public Relations (ISPR), the COAS directed provision of full assistance to civil administration in rescue and relief efforts.

He further said that PAF stands by PIA at this difficult time and extends all out support in Rescue Operation, said a PAF press release.

Ambulances, fire tenders and relief teams have reached the site of the crash, however, a large crowd gathered at the crash site is causing difficulties for the rescue workers. Pakistan s armed forces have also put out a statement saying that their teams are on the spot. “Army Quick Reaction Force & Pakistan Rangers Sindh troops reached the incident site for relief and rescue efforts alongside civil administration,” DG ISPR, Major General Babar Iftikhar tweeted.

“Pak Army Aviation helicopters flown for damage assessment and rescue efforts. Urban Search & Rescue Teams are being sent on-site for rescue efforts,” it also said. A senior Pakistani bureaucrat has said PM Imran Khan has directed all emergency services to mobilised to manage the tragedy. “Our heart goes out to all families of onboard passengers of the ill-fated PIA plane that just crashed close to Karachi Airport. On PM’s directions, all emergency services and resources mobilised, evacuation in progress,” Asim Saleem Bajwa said.

Sad News:Our heart goes out to all families of on board passengers of the ill fated PIA plane that just crashed close to Karachi Airport. On PM’s directions, all emergency services & resources mobilised,evacuation in progress.More details will be shared subsequently

Earlier, a Pakistan International Airlines (PIA) plane with more than 100 people believed to be on board crashed in the southern city of Karachi on Friday.

Images aired on Dunya News showed the Pakistan International Airlines (PIA) flight had smashed into a residential area, with clouds of thick black smoke billowing from the site.

“The plane crashed in Karachi. We are trying to confirm the number of passengers but initially it is 99 passengers and eight crew members,” said Abdul Sattar Khokhar, the spokesman for the country s aviation authority, adding that the flight was coming from Lahore.

Khokhar added that the aircraft was an Airbus A320 and was en route to Karachi.

The Pakistan military later tweeted that security forces had been deployed to the area and helicopters were being used to survey the damage and help ongoing rescue operations.

It comes just days after the country began allowing commercial flights to resume after planes were grounded during a lockdown over the coronavirus pandemic.

Pakistan has a chequered military and civilian aviation safety record, with frequent plane and helicopter crashes over the years.

In 2016, a Pakistan International Airlines plane burst into flames after one of its two turboprop engines failed while flying from the remote northern to Islamabad, killing more than 40 people.

PIA, one of the world s leading airlines until the 1970s, now suffers from a sinking reputation due to frequent cancellations, delays and financial troubles. It has been involved in numerous controversies over the years, including the jailing of a drunk pilot in Britain in 2013.

The crash comes as Pakistanis across the country are preparing to celebrate the end of Ramadan and the beginning of Eidul Fitr, with many travelling back to their homes in cities and villages.