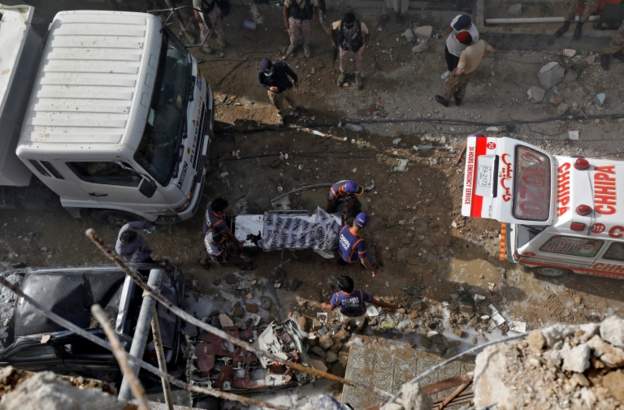 PIA spokesperson Abdullah Hafeez confirmed the crash and added that the A320 Airbus was carrying 90 passengers and 8 crew members from Lahore to Karachi on PK 8303. Witnesses said the Airbus A320 appeared to attempt to land two or three times before crashing in a residential area near the airport.

“The aeroplane first hit a mobile tower and crashed over houses,” witness Shakeel Ahmed said near the site, just a few kilometres short of the airport, according to Reuters.

Sindh Information Minister Nasir Hussain Shah confimed during a media talk that two passengers had survived and were brought to hospitals in injured condition. Details of other passengers are awaited.

Shah said authorities were in the process of collecting data and that it would be too soon to give a conclusive figure on deaths and injuries.

Saad Edhi, spokesperson of the Edhi Foundation, said they have shifted 35 bodies from the site of the crash to different hospitals. Around 25-30 injured people, who are residents of the area, have also been brought to the hospital, he added.

He said nothing concrete could be said about the number of deceased and survivors as of now.

Soon after the crash, Sindh Minister of Health & Population Welfare declared an emergency in all major hospitals of Karachi.

Speaking to the media outside Jinnah Postgraduate Medical Centre, Sindh Health Minister Azra Pechuho said that it was still to early to ascertain the number of people that had been injured in the crash.

“Eleven bodies have been brought to the hospital and six injured. Out of the injured, four are stable and two are burns cases.”

She added that officials were currently in the process of identifying the deceased in order to inform their families.

“We don’t know how many are injured and how many are dead. I am visiting hospitals […] we were already in an emergency situation due to Covid-19 so doctors were alert. We have also alerted surgical units,” she said.

The plane crashed only moments before its expected landing. A transmission of the pilot’s final exchange with air traffic control, posted on the website LiveATC.net, indicated he had failed to land and was circling around to make another attempt, reported AP.

“We are proceeding direct, sir — we have lost engine,” a pilot can be heard saying.

“Confirm your attempt on belly,” the air traffic controller said, offering a runway.

PIA Chief Executive Officer Air Marshal Arshad Malik, who left for Karachi, said the pilot told the control room that there was a technical issue and he decided to go around rather than land even though two runways were ready for landing.

“Our crew is trained to handle emergency landings. All my prayers are with the families. We will continue to provide information in a transparent manner,” said the spokesperson, Hafeez.