In absence of law, home based workers face exploitation 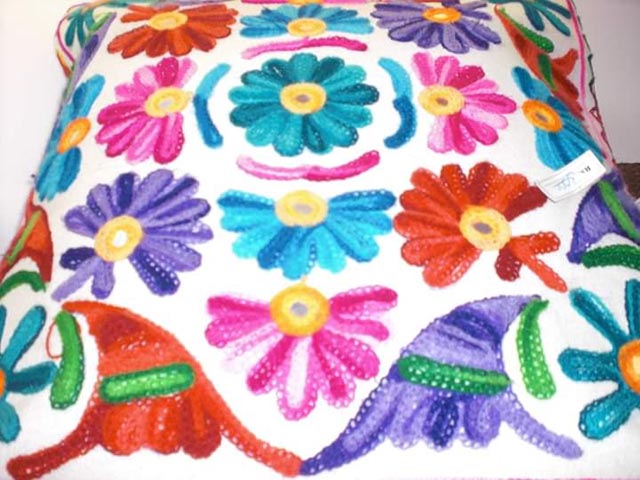 As usual, she keeps colored pieces of suits tight in her lap, tries to focus through her gaze while sitting in the corner of a semi lighten room, and keeps colored threads in her needle to draw art pieces on these suits with her embroidery skills that is a cultural history now and tradition for her. These artistic pieces are slightly different than the wrinkles on her forehead because she is facing hardship while counting the tinny threads on suits to show a better and clear embroidery pieces, as a world class artist somewhere in the world. Zarina Baloch lives in the outskirts of Saryab Road Quetta and she has been an embroidery worker for the last five years.

As usual, she keeps colored pieces of suits tight in her lap, tries to focus through her gaze while sitting in the corner of a semi lighten room, and keeps colored threads in her needle to draw art pieces on these suits with her embroidery skills that is a cultural history now and tradition for her. These artistic pieces are slightly different than the wrinkles on her forehead because she is facing hardship while counting the tinny threads on suits to show a better and clear embroidery pieces, as a world class artist somewhere in the world. Zarina Baloch lives in the outskirts of Saryab Road Quetta and she has been an embroidery worker for the last five years.

Smiles on her face too hide the exhaust of her mind, “the embroidery work is hard, it is affecting my vision, to show more hard work places my pieces in different exhibitions on different stalls all over the country for sale”, says Zarina. These are different pieces of the Balochi embroidery, they are having purchase power from 5000 PKR to 25000 PKRs, the more time she spend the more is the value of the suits. The simplest embroidery piece takes three to six month, the complex art work on these suits would take more time, told Zarina.

“If I take the direct orders from the people, then fine they will pay me the exact price, but if we take our pieces to the middle men and merchants in the bazaars they cash it in lesser price because he has the power to purchase it with high prices”, says Zarina. One of the expert of embroidery, who is a elderly woman could not mention her name because of the patriarchal and tribal structure of Balochistan told anonymously, “five seasonal bird (mosam murgh pach) is a kind of Balochi embroider is prepared and sold with 15000 PKRs, and the seasonal Gul Ghan Gul is another piece sold with 35000 PKR, seven color Korho 20000 PKRs and lily season values 500000 PKRs”.

Seemingly the colors, the arts pieces are gotten from the natural existence and the beauty of the regions has become their culture now shows a thousands of years history how they are taking the nature colors to become art pieces on cloth pieces in Balochistan. And the women who are strictly following the traditional and cultural codes of the patriarchal society would have been the reason these women utilize their skills and energies this way.

She told further that a suit can take to one year, if the same suit cost 50000 PKRs, it is still less price in comparison to the hard work they do. The middle men, the merchants and stall owners get enough money from these art pieces on suits. But most of these women are from the rural sides who have no direct contact with the market. When the online search showed that their shops sells the same pieces with an extra 20 to 30 percent prices on each piece prepared by these women embroidery workers. Though, it is hard to mention the exact prices because the home based workers business is not registered so different shops and stalls have different prices.

Balochistan is a diverse national and cultural province, making 44% of the total geography of Pakistan, where people live in far flung regions. The Pashtun, the Baloch, the Brahvis, the Sindhis, the other race negros coastal belt people, the Hazaras, the Punjabis and the Urdu speaking people living here have different embroideries and different cultures shows the diversity in its arts work and embroidery pieces. Instead of embroidery, the carpets, ceramics pottery, and the dry fruits, the scattered agriculture, the live stocks are all having a bigger share from the domestic workers are mostly women leading all these fields.

According to 2017 census of Pakistan, 12.4 million people live here where the women are 5.8 million that makes 47.47 percent of the population in mostly patriarchal and cultural societies of different linguistic and ethno groups. Saima Javed, one of the domestic workers rights activist defines the women work as “domestic work is where someone has liberty to sit anywhere and create her/his pieces at home and sell them in the market”. She is of the view that the domestic workers or economy is yet to be framed through a formal policy this results in the exploitation of these women who are the direct producers of all these products.
“The middle men get the surplus value input through the home based workers”, she told.

“If we see the time spent on each artistic piece on embroidery and its value compared, is very less for a home based worker to live on, as most of these women are the bread earners of their vast families, these women don’t understand how to connect to the market because of no policy and no government support, otherwise we have potential to spread these works in national and international markets for better values”, says Saima Javed. Talhat Jehan runs a center named “Scouts Skills Learning and Developing” from 2015. He teaches the youngsters how to learn the embroidery, tailoring, beautician and designing skills. And the center is tested by the Trade Testing Board of Pakistan and those who passes through the course are given the internship chances, the more brilliants become instructors in the same center.

Through the help of UNICEF the same center has trained 1400 skilled persons so far. Most of the trainers are from the people who are home based workers. “Embroidery and home based work is empowering women not only in Pakistan but it is a trend globally, but owing to no policy for the safety of these home based workers economies and giving them their due rights over their pieces is lacking”, says Zolekha Khan Mandokhail the official of Chamber of Commerce.

“These women are not aware of the market value of their products, because of the little literacy we have and no government resources to polish these women and connect them to the open market”, says Zolekha.
“There is a dire need of home based workers policy through government and creation of different vocational institutions, this would surely change our young lot into a productive lot and contribute to the economy of the province and the country alike”, says Zolekha Khan. The people connected to the home workers category are exploited, they are not given the chances of skills and trainings, nor they have a price for the product they prepare is due to the lack of government policy, says Qamar Sabir, one of the lawyer from Balochistan.

Article 18th of the 1973 constitution is securing every ones right of professionalism and business, and it is part of the law that a worker should have at least 17500 PKRs monthly salary is yet to find ground in Balochistan and these domestic workers or home based workers should have the privileges and safety of their rights under the United Nations International Labor Organization’s 117 C convention, told Qamar.
The Balochistan National Party’s central official Ghulam Nabi Marri is of the view that owing to the lower or in some areas no literacy rate, no industries and factories is causing the unemployment graphs to touch the sky. “None of the society can progress without the women equal shares, all the domestic workers should have guarantee and safety of their rights and it is the government and state job to do so”.

“On one hand we do not have industries, on the other hand government is yet to recognize the home based workers as labors”, says Pir Muhammad Kakar, the general secretary of Pakistan Workers Federation in Quetta. “Old Age Benefits (OBI) would come for these hard workers if they get recognition through a proper policy by the government of Balochistan”. “We struggle for the rights of every labor, same are the labors at home, who are majority women and their rights, medical, pensions, old age benefits, without middle men markets should get preserve, we’ve an alliance through Pakistan Workers Federation for the home based workers”, says Kakar.

“The work on the policy through a task force by the government of Balochistan led by the secretary of labor department, having members of the assembly, labor department, different labor organizations, civil society, experts and different INGOs and NGOs, now the draft is ready”, says Director General Labor and Manpower Saeed Ahmed Sarparah. “The policy is ready, we are processing it for the legal department, after that cabinet and the provincial assembly would approve it, and after that the policy for domestic workers would get ground as well”, says Sarparah.

A survey named Rapid Assessment is conducted through the Labor Department of Balochistan, the International Labor Organization, UN Women, this would collect the data of the people, mostly women who are part of the domestic workers lot. Then these workers would be given the social security services through registration and a way paved for their direct contacts to the market without the involvement of middle men and exploitation, told Sarparah.