Coronavirus cases in Pakistan escalate to 1022 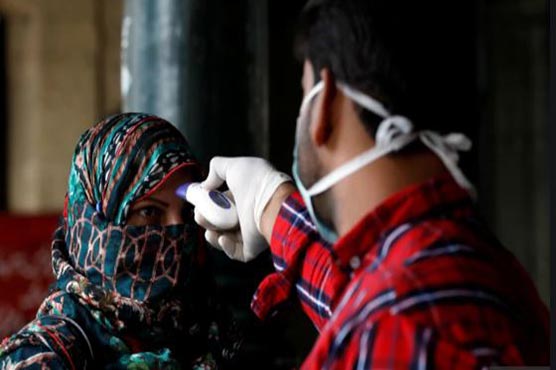 LAHORE: Pakistan on Wednesday has reported eight deaths from novel coronavirus while the total number of cases have surged to 1022 as 413 patients have been tested positive for the epidemic in Sindh, 117 in Balochistan, 310 in Punjab, 80 in Khyber Pakhtunkhwa, 81 in Gilgit-Baltistan, 20 in Islamabad and one in Azad Kashmir.

LAHORE: Pakistan on Wednesday has reported eight deaths from novel coronavirus while the total number of cases have surged to 1022 as 413 patients have been tested positive for the epidemic in Sindh, 117 in Balochistan, 310 in Punjab, 80 in Khyber Pakhtunkhwa, 81 in Gilgit-Baltistan, 20 in Islamabad and one in Azad Kashmir.

According to details, Advisor to Chief Minister Sindh Murad Ali Shah, Murtaza Wahab has confirmed that 10 more coronavirus patients have recovered in Sindh.

Total number of patients who have recovered is now 21.

Punjab Health Minister Yasmin Rashid had confirmed death of first coronavirus patient in Lahore. In a tweet she said, the 57-year-old patient identified as Afrasiyab, who was admitted in Mayo Hospital, lost his life on Tuesday.

The minister further said: “These are indeed difficult times for the whole country. Only way we can fight this pandemic is by staying indoors and following the precautionary measures.”

In an effort to provide economic relief to the already suffering people amid coronavirus outbreak, Prime Minister Imran Khan has announced a major cut in fuel prices and a package of Rs200 billion for the poor people.

Talking to senior media persons in Islamabad, he said that the government will help the poor in difficult times, adding that the impression of a lockdown is being given in the country.

Amid coronavirus crisis in the country, Pakistan Railways has suspended all passenger train services till March 31.

In a notification, Pakistan Railways announced that passengers who have advance booking on suspended trains will be accommodated in other trains of their choice on priority once the train service is resumed. In case of not availing ticket, they will get full refund after resumption of train operations.

Schools in Punjab to remain closed till May 30

It has been decided during cabinet meeting of Punjab government that schools in the province will remain closed till May 30.

Addressing a press conference after the cabinet meeting, Chief Minister Punjab Usman Buzdar announced that in light of the prevailing situation, private schools have been directed to charge only 50% fee from students.

Punjab Chief Minister Sardar Usman Buzdar has imposed partial lockdown throughout the province for 14 days in order to control the spread of the virus as number of confirmed cases surged to 281 in the province.

He appealed the masses to cooperate with the police, army and law-enforcement agencies, adding that pillion riding has also been banned although families will be exempted.

Pak Army called in across country to combat coronavirus

The federal government has called in the Pakistan Army to help in dealing with the coronavirus pandemic.

According to a notification issued by the Ministry of Interior, the federal government deployed the Pakistan army across Pakistan under Article 245 of the Constitution.