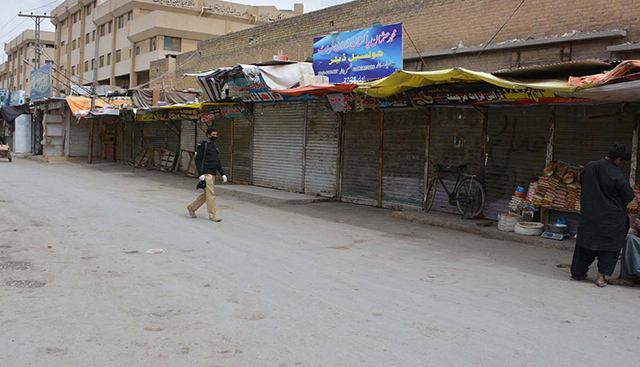 QUETTA: The known number of coronavirus cases in Balochistan has reached 131 after 12 new cases were reported Thursday morning.

QUETTA: The known number of coronavirus cases in Balochistan has reached 131 after 12 new cases were reported Thursday morning.
The figures have been confirmed by the Government of Balochistan.
The report says that 2,033 people have been screened for the virus and the results of 165 people have yet to come.
The Balochistan government has said that it will take strict measures to ensure people follow the lockdown. The government has even sealed Quetta’s Hazara Town and Mari Abad.
Pakistan’s tally crossed 1,000 on Wednesday. So far, eight people have died because of the virus and one death was reported in Balochistan.
To prevent the advance of the Novel Corona virus in Quetta, lockdown continues in the city. The Pak-Afghan and Pak-Iran borders are completely closed for trade and other activities.
Meanwhile, in various districts of Balochistan, people continue to distribute donations and rations to help the needy people.
Necessary food retail and other shops are allowed to remain open, where people need items in most of the central and suburbs of Quetta, roads are deserted.
All small and large business centers are closed. Police and Levies force urge the public, especially youth, to stay away from sports activities and gatherings in different areas, while they were warned about the action.
The number of people infected with the Novel Corona virus in Balochistan has increased to 131, according to government spokesman Liaquat Shahwani 1159 test results have been negative while results of 130 suspects.
It is said that all the victims of the Novel Corona virus are being provided the best treatment facilities, including the suspects are also being provided with all facilities at the Quarantine Centers.
Authorities say 277 people are placed in Quarantine Center of Taftan and 111 in Quetta.
On the other hand, trade activities on the Pak-Afghan and Pak-Iran borders are still closed.

Hundreds of Pakistani drivers in a video message from Spin Boldak area of Afghanistan appealed to the Prime Minister Imran Khan, Chief of Army Staff, to open the Pak-Afghan border immediately for entry into the country, so that they can remain safe from the global epidemic and reach their homes.