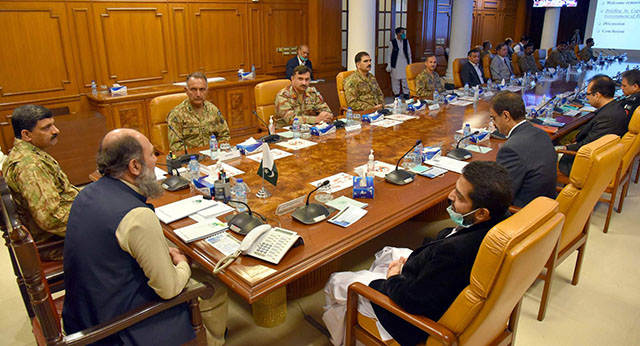 QUETTA: A meeting of the Provincial Apex Committee, chaired by Chief Minister Balochistan Jam Kamal Khan and Commander Southern Command Lt. Gen. Waseem Ashraf, reviewed the current situation of Corona virus and ongoing and proposed measures to prevent it, to stop Corona virus spread.
Important decisions were also taken in view of the long-term strategic strategy, as provincial Home Minister Mir zia Langove, GOC 41 Division, IG FC (North), COS Southern Command, Additional Chief Secretary Home, IG Police, Secretary health, medical experts and other relevant officials attended the meeting.
Chief Secretary Balochistan Fazeel Asghar briefed the meeting about the steps taken to improve Corona virus prevention, facilities for pilgrims in Taftan and to improving the existing quarantine and isolation centers in Quetta, Chaman and Taftan.
CS told that 5163 pilgrims reached Taftan in March, out of those, 4139 were sent to their provinces. 457 pilgrims belonging to Balochistan were shifted to Quetta, while 119 reported positive for coronavirus, while one patient died.
He further told that upto 150 tests are being conducted in Taftan mobile testing laboratory, where an agreement has been signed with microbiological association, which will give government the facility to conduct 2150 tests on daily basis.
“A control room has also been in S&GAD, as tracking and tracing of all the people coming from outside countries is ensured. Hotline desk has been established, which is functional 24/7,” he added.
CS Fazeel Asghar said that those who have been cleared in the testing, will be allowed to go homes, with condition to remain in isolation. Implementation on the disaster management village has been started on a fifty acres area, while isolation wards are being set up in Taftan, Sibi, Chaman, Naseerabad.
During the meeting, issues related to lockdown, daily wage laborers and inter-provincial traffic was discussed. Prevention issues were reviewed, the meeting expressed satisfaction over the actions taken by civil and military institutions to prevent Corona virus and to take precautions in public.
The meeting said that doctors and medical staff are on the front line to prevent the virus, so the provision of protective kits for their protection will also be ensured.
It was decided that only Pakistanis would be allowed to enter the country while preparing the complete data of these persons and they would be tested and kept in Quarantine. In addition to conducting prisoner tests in prisons, the prisoners will be allowed to go on bail, payroll accordance to the law.
The meeting established a food security task force to ensure continued availability of food items in Quetta and other districts. By keeping in touch with relevant dealers, traders and grain markets, meeting directed to contact PASCO immediately. In addition to buying 150 thousand bags wheat, it was decided to buy timely wheat directly from the farmers in Naseerabad division, while maintaining the stability of food grains, prices to provide relief to the people while working on daily wages.
It was decided to start the process immediately by providing financial assistance to the laborers and the poor and providing them with rations, a consultation comprised of experts from the Medical and WHO Experts for Corona Virus Prevention.
It was decided to completely lockdown Marriabad and Hazara town, while restricting the movement.