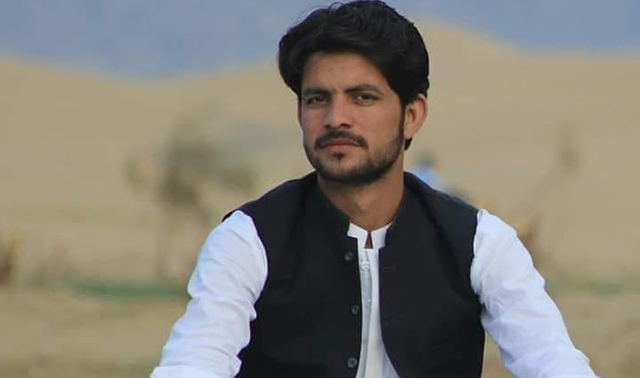 QUETTA: A youth striving against curse of narcotics was shot dead by unknown armed in Nushki town of Balochistan on other day.

QUETTA: A youth striving against curse of narcotics was shot dead by unknown armed in Nushki town of Balochistan on other day.

Sami Ullah, student of BS Zoology department University of Balochistan, about two months ago had raised the voice against drug peddlers and disclosed the suspected drug points including names of alleged drug pushers before the Commissioner Rakhshan Division during an open Kachari.

On the day of incident, he was standing outside of his home located in Qazi Abad, when unknown armed men ridding a motorcycle opened fire on him, leaving him dead on the spot, while two more men were also came under the range of firing and suffered injuries.

Following the cold-blooded murder, the heirs and commuters of the area got enraged and take out a protest in-front of Frontier Corps (FC) main gate, the enraged protesters chanted full-throat slogans against the drug pushers and urged upon administration for the early arrested of involved culprits.

The district administration after assuring to protestors had demolished the suspected drug point, lodged a case on the part of family members and started search for the culprits.

Meanwhile, in connection of cold-blooded murder, district Police Nushki claimed to have arrested two relatives of police constable, who was involved in the killing.

Commissioner Rakhshan Division though a letter has requested the provincial government for possible compensation for the heirs of Samiullah, further in his letter the Commissioner had said police constable Muhammad Yousaf who had been dismissed over the charges of selling drug, reportedly along-with his brother had killed the young man Sami Ullah.