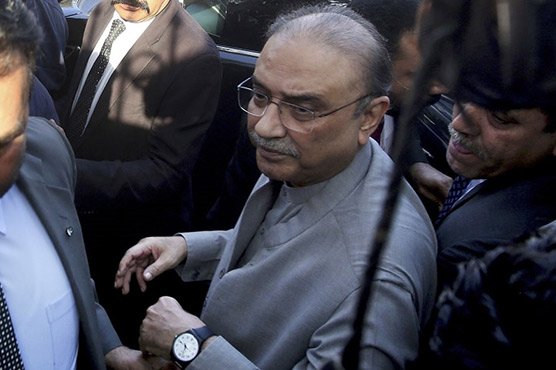 In this regard, the NAB Rawalpindi has prepared an application that will be filed in the apex court after approval of the bureau’s prosecutor general.

The application maintains that the Islamabad High Court (IHC) had granted bail to Mr Zardari while ignoring (earlier) judicial decisions.

On Dec. 12, the PPP’s co-chairman was released from custody at the Pakistan Institute of Medical Sciences (Pims) that was declared a sub-jail on the orders of the IHC in the same cases on medical grounds. The bail was granted on Dec. 11 against surety bonds of Rs20 million after staying under NAB’s detention for six months.

The court had noted that the petitioner, who is one of the accused in a reference pending before an accountability court, “has not been convicted and, therefore, he is to be treated as innocent unless proven guilty”.

On Nov. 12, an accountability court in Islamabad had rejected Mr Zardari’s application for transferring him to Karachi for his ongoing medical treatment.

On July 29, an accountability court issued copies of the Park Lane reference against Mr Zardari which states that Zardari had taken Rs1.5 billion loan from National Bank of Pakistan (NBP) in the name of fake company Parthenon.

On July 1, the NAB had arrested Mr Zardari in the Park Lane case while he was already in custody with the bureau’s Rawalpindi directorate in connection with the fake accounts case.

On June 26, Mr Zardari had withdrawn his bail applications in three cases saying he knew why he was suffering and “does not want to embarrass anyone”.

He withdrew his applications seeking bail in Park Lane, Tosha Khana luxury vehicles and bulletproof vehicles references filed against him by NAB.

On June 10, Mr Zardari had surrendered himself to a team of the National Accountability Bureau (NAB) after IHC rejected his and his sister Faryal Talpur’s pre-arrest bail plea in the money laundering case.

The accountability watchdog had arrested him in June after the cancellation of his pre-arrest bail by the Islamabad High Court in the fake bank accounts case.

At that time, the NAB had stated that it was proved during the investigation of the case that PPP leader had done corruption and money laundering with the help of his close aides. The NAB further had stated the loans were taken by showing fake documents and those loans were then used for personal gains.

According to the reference, Rs1.5 billion were taken in 2009 and Rs800 million were withdrawn in 2012. It had added that the NBP suffered loss of Rs3.77 billion due this fraud. It had further mentioned that Mr Zardari as the president had forged documents to comply with the loan policy and coaxed the NBP into loan approval.

Mr Zardari was 25pc share holder in the Park Lane Estate Company and he also made a fake company Parthenon in the name of his employees. Besides, a property was also bought in the IBC Center where the bureau has sealed eight floors.

As per the prosecution, the Park Lane case is being investigated under different sections of NAO 1999 and Anti-Money Laundering Act 2010 for Zardari’s alleged involvement “in extending loan and its misappropriation by M/S Parthenon Private Limited, M/S Park Lane Estate Private Limited and others”.