Federal Cabinet to give approval for Rs15 billion relief package 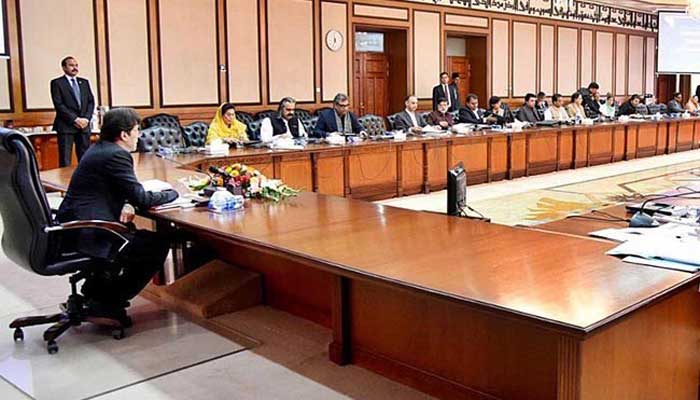 ISLAMABAD: The Federal Cabinet in its meeting today is likely to announce a Rs15 billion package to provide relief to the consumers from back-breaking inflation

ISLAMABAD: The Federal Cabinet in its meeting today is likely to announce a Rs15 billion package to provide relief to the consumers from back-breaking inflation

The cabinet will consider diverting Rs15 billion from the Ehsaas Programme allocation towards providing subsidies to the masses. The relief will be provided through the Utility Stores Corporation (USC).

“The direct subsidies might utilise Rs40 to 50 billion through direct and indirect intervention going to be approved by the cabinet today,” the report said.

Prime Minister Imran Khan has also revived the Special Focus Group (SFG) on essential food items under the jurisdiction of the Ministry of National Food Security and Research with the mandate to develop the Management Information System in order to plan and coordinate demand and supply of 15 to 20 essential food items.

“There are reports that some flour mills owned by close political allies of the government were allegedly found involved in smuggling of flour in the guise of maida and suji,” the publication said.

The government had allocated Rs191 billion for the Ehsas Programme but so far the utilization stands at Rs50 to 60 billion.

The government possessed cushion to divert these resources for providing relief to consumers against the price hike as CPI-based inflation touched new heights and stood at 14.6 per cent for January 2020. Now the economic ministries, as well as State Bank of Pakistan (SBP), are projecting that the inflation would start receding and might come below 13 per cent from February 2020.

“The prime minister might also direct law enforcing agencies to crack down on the hoarders of wheat and sugar stocks,” said official sources, adding that the Monetary and Fiscal Coordination Board would also meet soon to focus on taking steps taming inflationary pressures through the coordinated efforts.

Separately, in another meeting, it was decided that the prices of flour, ghee, pulses, rice and others edibles would be subsidized and the district administration would ensure implementation of the relief package. It was also decided to provide subsidised flour to 50,000 registered tandoors.

The Economic Coordination Committee (ECC) of the Cabinet on Monday did not discuss the hike in gas tariff.

The decision in this regard, the report said, would be taken in the cabinet meeting to hike the prices of gas or postpone it for time being keeping in view the rising inflationary pressures.

The ECC also did not consider the prices of power sector fixation mechanism during the meeting.

The prime minister made it clear during a meeting of the government spokespersons which he presided over that there was no truth in media reports regarding the removal of Shaikh and Baqir.

He also reiterated his resolve and commitment not to spare those behind the recent flour wheat crisis and the increase in the price of sugar in the country in recent days.

Last week the premier had ordered an investigation into the flour and wheat crisis and the factors behind the surge in sugar prices. He also announced to go to any extent to provide relief to the common man.