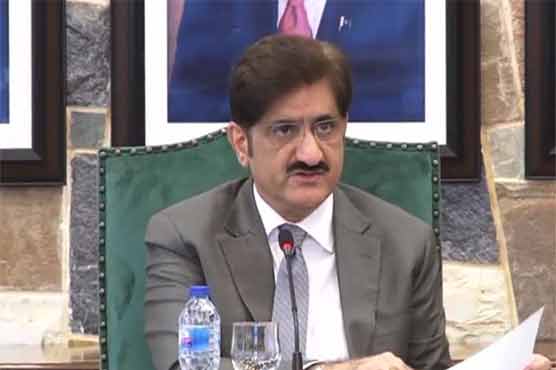 Sindh Chief Minister Murad Ali Shah on Saturday is presiding over a meeting of the Sindh Public Safety Commission, during which provincial Inspector General of Police Kaleem Imam has presented an investigation report against 23 police officers during the year 2019.

CM Murad outlined that in 2013, Karachi stood at sixth and seventh place in the Crime Index, and now it has dropped to 93rd spot, and subsequently expressed satisfaction over the law and order situation.

Earlier today, while talking to the media, Sindh Minister for Information Syed Nasir Hussain Shah said on Saturday that the matter of Sindh Inspector General of Police Kaleem Imam has been made controversial without any reason.

“IG is a senior officer, he needs to take a break In Punjab or KP, an IG can be changed immediately,” he said.

Responding to the Supreme Court yesterday’s orders, during hearing a case on illegal constructions and encroachments in Karachi, to the Sindh government to demolish all illegally-constructed buildings in Punjab Colony, Delhi Colony, PNT Colony and Gizri Road areas, Shah said that the apex court’s directives would be implemented in letter and spirit.

“Builder mafia occupied much of villages’ land while the Sindh government regularised many of the old settlements.”

“The uninhabited buildings will be demolished first, however the process will take some time as Karachi is a big city” he added.

The directions were given by a three-judge bench headed by Chief Justice of Pakistan Gulzar Ahmed and comprising Justice Faisal Arab and Justice Sajjad Ali Shah, at the apex court’s Karachi registry.