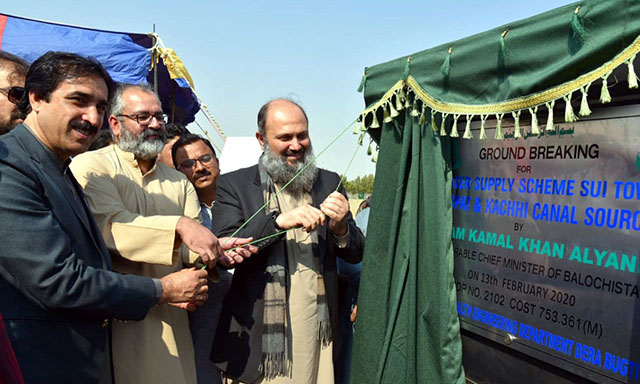 “Coalition Government in Balochistan distributing equal development schemes to all districts rather than pursuing policies or previous regimes of allocating funds on favoritism.” Jam Kamal said added flawed policies of our predecessors enhance deprivation in Balochistan.

He further said, the remote areas of Balochistan were given mammoth of development funds in order to develop infrastructure, schools and health centers,

“Health and Education remained our top priority since we have sworn-in in provincial government, Health Centers in remote districts being fulfilled with medicines, equipment and presence of doctors while BHUs and RHCs being revamped across the province.” CM Balochistan said.

Talking on contribution of Dera Bugti in development of Pakistan the Chief Minister said, the Sui Town has been producing natural gas since 1954 which had kicked-off economic activities in country’s industrial sector but unfortunately people of Sui and Dera Bugti still deprived from gas and electricity,

“I have been visiting all districts in order to review the need and plight of every single area of Balochistan, provincial government would allocate funds for people of Sui and Dera Bugti in next financial budget.” Jam Kamal announced.

Meanwhile Chief Minister has laid down the foundation stone of Sui Town Water Supply Scheme and visited PPL Hospital in order to review health facilities being provided to people of Dera Bugti.

He called PPL Hospital as gift for people of Dera Bugti added provincial government with contribution of PPL built this hospital where 24 hours healthcare being provided to people of Sui and Dera Bugti.

“The Project would foster cultivation from Dera Bugti to Jhal Magsi while agricultural land in Dera Bugti would receive water from this project.” Jam Kamal said.