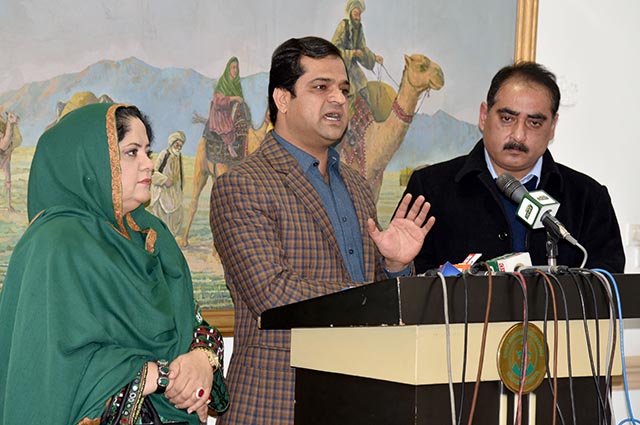 QUETTA: Spokesman to Government of Balochistan Liaquat Shahwani on Tuesday confirmed 20 deaths caused by snowfall and torrential rains in Balochistan adding all national and provincial highways restored for traffic.

QUETTA: Spokesman to Government of Balochistan Liaquat Shahwani on Tuesday confirmed 20 deaths caused by snowfall and torrential rains in Balochistan adding all national and provincial highways restored for traffic.

“Provincial Government has utilized all resources in order to rescue people stranded in snowfall and rain hit areas across the province, food items being provided to people in western areas of Balochistan.” Shahwani said while briefing the Journalists regarding government’s relief and rescue operations.

He corroborated deaths of 20 people in incidents like mud roof collapsing and highways accidents adding more than 23 people reportedly injured in various incidents across the province.

“National and provincial highways have been restored for traffic while link-roads would be opened for traffic in next one or two days.” Shahwani said added government is committed to continue relief operation until we rescue a single individual stranded in snowfall.

He cited government’s early notification regarding predicted snowfall in many parts of Balochistan added provincial government urged citizens to refrain from unnecessary travel,

“Recent spate of snowfall has broken down 30 years’ record but provincial government had prepared early arrangements and delivered heavy machinery in many areas in order to control damages and rescue human lives.”

He further added, Chief Minister Balochistan Jam Kamal Khan Aliyani himself visited the snowfall hit areas while he remained in contact with all Commissioners and Deputy Commissioners in order to monitor relief and rescue operations,

Replying to query regarding rescue operation in Mashkawail where torrential rains blocked communication Shahwani said, a group of people lost their path but district administration has rescued them.

Responding to another query regarding prolong blackout and low gas pressure in the provincial capital the spokesman said, all departments have been working day-night in order to restore electricity and gas supply in Quetta,

“Chief Minister has presented a strong case of Balochistan in Council of Common Interest CCI regarding gas supply to Balochistan.” He said added Federal Government corroborated CM Balochistan’s stance regarding Balochistan’s first right on its natural gas and assured to address the low gas pressure issue on priority level.