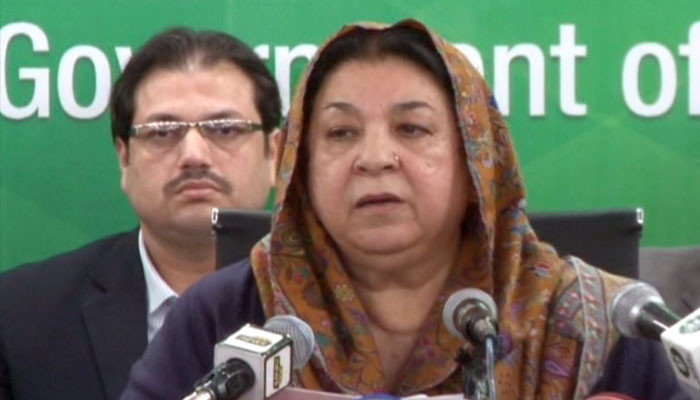 Punjab Health Minister Yasmin Rashid on Tuesday said that the relief granted to former prime minister Nawaz Sharif for medical treatment abroad had expired and he should submit an updated report regarding his health to the provincial authorities.

Punjab Health Minister Yasmin Rashid on Tuesday said that the relief granted to former prime minister Nawaz Sharif for medical treatment abroad had expired and he should submit an updated report regarding his health to the provincial authorities.

Rashid made the statement while talking to reporters in Lahore on Wednesday afternoon. The provincial minister said that the court-granted relief for the former premier had expired on December 25, and photos of him dining out in London were now creating controversy.

Sharif had been granted bail on medical grounds by the Islamabad High Court for eight weeks in late October. He had been serving a sentence in the Al-Azizia reference when he was granted bail, and had subsequently left Pakistan for London for medical treatment.

The relief granted to the former premier expired on December 25, exactly two months to the day he was granted bail. Earlier this week, photos of him allegedly dining out with members of his political party in London sparked controversy, and Rashid referenced those photos in her presser.

“Everyone has seen the viral photos of Nawaz Sharif on social media. We have asked Dr Adnan (Nawaz’s physician) to tell us whether the excursionings of the former premier have anything to do with his health condition,” Rashid said in apparent reference to said photos.

On December 25, the former premier’s legal team had submitted a report to authorities in Pakistan detailing the health of the former premier and asked the court to extend his bail on medical grounds. Rashid brought up the report in her press conference as well.

“The report does not mention anything new related to the treatment being accorded to Nawaz Sharif,” she told reporters. “We have written to the home department that we cannot give any opinion on the report,” she said on behalf of the provincial health authorities.

Rashid said that she had talked to Sharif’s personal physician twice during the previous day and told him that the bail given to his patient had been on humanitarian and health grounds. “Nawaz Sharif seems fine on first glance,” Rashid said, apparently referring to the leaked photos.

The health minister also dismissed suggestions that the former premier had been out for a breath of fresh air when the photos were taken, saying that “sick people do not go out to dine at restaurants for fresh air, unless the air at the restaurant has some special oxygen”.

“I have asked Dr Adnan to submit a new report on behalf of Nawaz Sharif. If Sharif is undergoing some treatment in London, we should be informed. The new report should indicate what tests Sharif has had done, and what treatment he is undergoing currently for his sickness,” Rashid remarked.

The minister clarified that if the former premier did not cooperate with the government, the interior ministry would take action. She added that if Nawaz’s treatment had been completed, he should return to Pakistan, and if not, the new reports should be sent to the government.