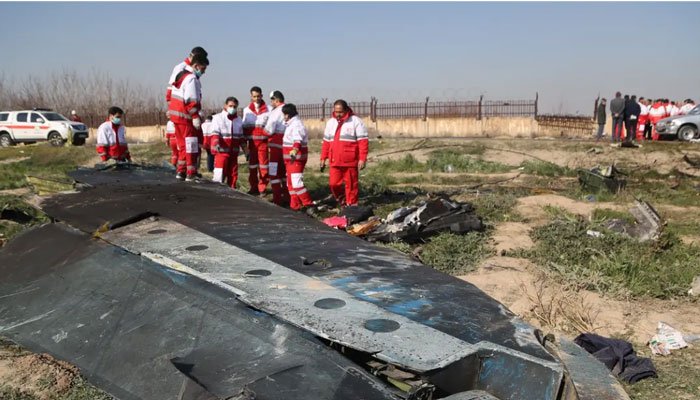 TEHRAN: Iranian armed forces on Saturday admitted that they unintentionally shot down the Ukrainian airliner that crashed this week and blamed “human error” for the mistake.

TEHRAN: Iranian armed forces on Saturday admitted that they unintentionally shot down the Ukrainian airliner that crashed this week and blamed “human error” for the mistake.

The plane, which crashed on Wednesday killing all 176 people on board, was mistaken for a “hostile plane” and was hit while enemy threats were at the highest level, according to a press statement published by the official IRNA news agency.

All 176 people on board were killed when the jet crashed on Wednesday, hours after Iran launched ballistic missiles at two US bases in Iraq to avenge the killing of its top general in an American airstrike.

According to Iranian media, officials said that the plane had flown close to a “sensitive military centre” and was mistaken for a “hostile target”. The statement added that the military was at its “highest state of readiness” amid the US tensions.

It also said it would upgrade its systems to prevent such “mistakes” in the future. The military statement, which was read out on state TV, added that the people responsible would be held accountable, and expressed condolences to the victims’ families.

Iranian President Hassan Rouhani Saturday said his country “deeply regrets” the shooting down of a Ukrainian airliner, which he described as “a great tragedy & unforgivable mistake”.

“Armed Forces’ internal investigation has concluded that regrettably missiles fired due to human error caused the horrific crash of the Ukrainian plane & death of 176 innocent people. Investigations continue to identify & prosecute this great tragedy & unforgivable mistake,” he said on Twitter.Iran’s Foreign Minister Javad Zarif also offered his country’s “profound regrets, apologies and condolences” to the families of the victims. “A sad day,” Mohammad Javad Zarif wrote on Twitter. “Human error at time of crisis caused by US adventurism led to disaster,” he said.”Our profound regrets, apologies and condolences to our people, to the families of all victims, and to other affected nations.”

“I emphatically advise the general headquarters (of the armed forces) to follow up on shortcomings” to ensure this kind of error does not happen again, said a statement on his official website, adding he expressed his “sincere condolences” to the families of the deceased.