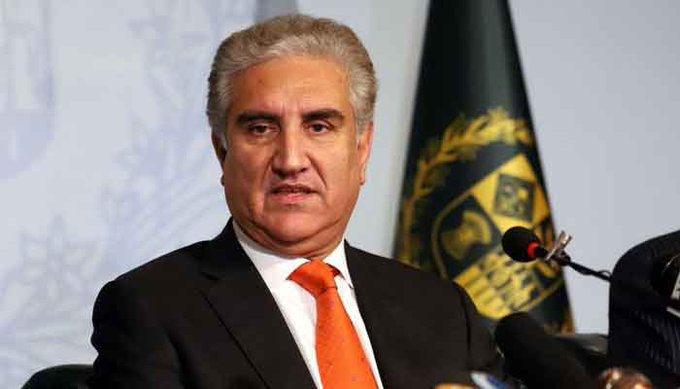 The foreign minister, in his meeting, told the UN secretary-general that Pakistan remained committed to holding a dialogue with India over the situation in the disputed valley, which has been under a military lockdown since August 5.

“India has been backtracking from talks but Pakistan remains committed,” Qureshi told the media after his meeting. “The international community should play its role in helping the people of the occupied valley from Indian subjugation and suppression.”

The UNSC on Wednesday afternoon met behind closed doors to discuss the Kashmir issue for second time in less than six months. In August last year, the Security Council had, for the first time in over five decades, met to discuss the critical human rights situation in the occupied valley.

Qureshi, while talking to media about his meeting with the UN chief, added that the Kashmir issue was not India’s internal matter. “This is the second time in five months that the Security Council discussed the Kashmir issue,” he said.

The foreign minister also thanked China for convening the UN Security Council session on the prevailing situation in occupied Kashmir. China has long voiced concern over the situation in the occupied valley and said it supports Pakistan in its fight for the Kashmiris.

Responding to a question, the foreign minister said he had apprised the UN chief about Pakistan’s efforts in de-escalating the tensions simmering in the Middle East.

“I also briefed the UN chief about the progress of my recent visits to Saudi Arabia and Iran. Pakistan is doing what it can to de-escalate the situation between Iran and the US,” he said.

Qureshi’s visit to the US comes amid heightened tensions between Washington and Tehran after the former killed Iranian commander Qassem Soleimani in a drone strike in Baghdad. Iran retaliated by targeting a US troops base in Iraq.

The foreign minister, in his talks with the US leadership, will focus on Pakistan’s diplomatic outreach, which has been undertaken on the direction of Prime Minister Imran Khan, in the wake of the recent tensions in the Middle East.

The foreign minister will now travel to Washington where he will meet Secretary of State Mike Pompeo, National Security Advisor Robert O’ Brian and other senior US administration officials. He will also have meetings on the Capitol Hill, besides engagements with the media, policy think tanks and the Pakistani diaspora.