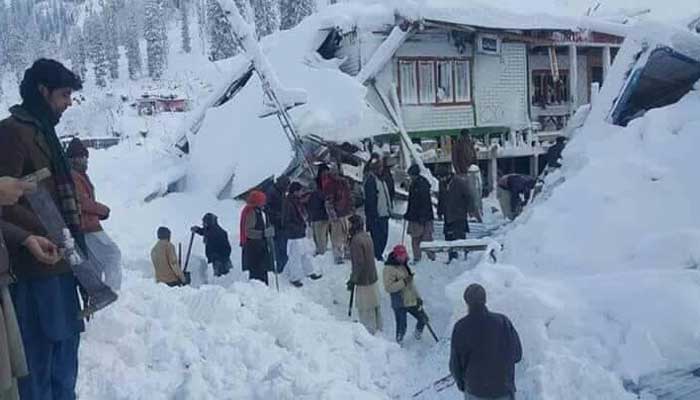 The death toll from snow-related deaths climbed to 83 on Tuesday as severe weather continued across the country bringing life to a standstill,

The death toll from snow-related deaths climbed to 83 on Tuesday as severe weather continued across the country bringing life to a standstill,

According to a statement by the National Disaster Management Authority (NDMA) at least 55 people have been killed in Azad Kashmir due to weather related deaths.

Furthermore, the NDMA said 19 people have died in an avalanche while 10 others were still missing.

Four injured have been recovered from the rubble, an NDMA spokesperson said.

“Rescue operation is under way with the help of Pakistan Army,” Qadri said, adding that due to the severe weather conditions the rescue operations were hampered.

He added the injured were shifted in Pakistan Army helicopters to nearby hospitals.

Hundreds of passengers, including women and infants, were stuck on the roads in harsh weather on Monday night as a massive snowstorm wreaked havoc in different parts of Balochistan.

Levies officials said that more than 500 passengers were stranded in Kan Mehtarzai area of Killa Saifullah district, where temperatures dipped to as low as -14°C while heavy snowfall and strong winds almost buried cars on the main National Highway.

The MET Office has forecast cold and dry weather for most parts of Balochistan for the next 24 hours.

Emergency had been declared in seven districts of Balochistan, which were badly affected due to heavy rain and snowfall.

Meanwhile, heavy snowfall in Gilgit-Baltistan have broken the 50-year record. An emergency has been declared in Hunza and Nagar after continued rain and snowfall for the last 36 hours paralysed life in the northern region.

Authorities have advised people to avoid travelling through mountainous routes owing to the threat of landslides. The snowfall has also greatly affected the electricity distribution system in Gilgit Baltistan coupling the hardship of locals.

Meanwhile, five persons including two women were buried alive and three others injured, in two separate incidents of snow avalanches in the snow-clad Neelam valley of the AJK during the last 24 hours, official sources said.