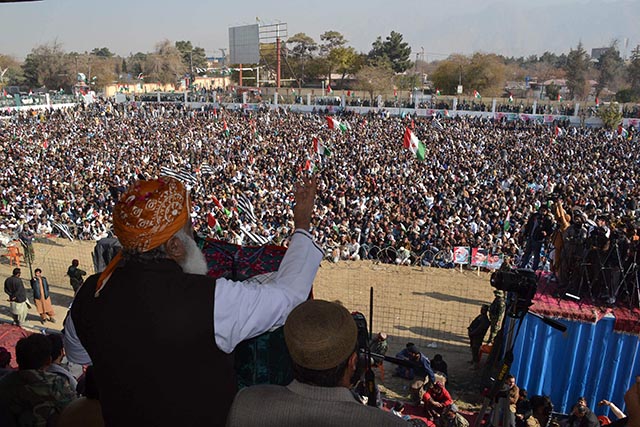 Maulana expressed irk over central government added the fragile parliament emerged after elections 2018 was fully incompetent and not able to address public woes, “In order to strengthen constitution, we need strong democracy because establishment has no right to decide who will run the government.” Maulana Fazal ur Rehman added.

Taking the jab on Pakistan Tehreek e Insaf and Prime Minister Imran Khan, the JUI F said, our ancestors didn’t cow down before British invaders, how can we accept the rule of a man placed by western powers in Pakistan,

“General retd Musharaf once asked me to accept United States’ power in the region but I replied him that, unlike your forefathers, we have been lessened by our elders to confront all invaders whether external or internal.” Maulana Fazal ur Rehman said vowing no compromise on public rights.

Calling Azadi March as a successful event he said, the Azadi March has opened a door of struggle against selected regime which spread a global message that we don’t accept selected rulers.

He also stressed upon all institutions to work in their jurisdictions added we never supported collision among powerful institutions, “Being senior politicians of the country, a respect the constitutions thus the powerful sectors of Pakistan should accept the supremacy of parliament and constitutions.” Maulana Fazal ur Rehman said added ousting the incompetent regime has become imperative for better future of this country.

Sarcastically talking on Federal Cabinet Minister’s statements regarding inflation in the country Maulana said, ironically the rulers mocking on masses’ woes by commenting on price of tomato and pea, “Prime Minister announced 10 million jobs but instead of creating jobs his cabinet members claimed that government not responsible to provide jobs.”

The JUI F Chief lauded the political and humanitarian struggle of Khan Abdul Khan Samad Shaheed added we should pursue the feet of Samad Khan who never compromised on public rights.