Dec will be last month of PTI govt: Fazl ur Rehman 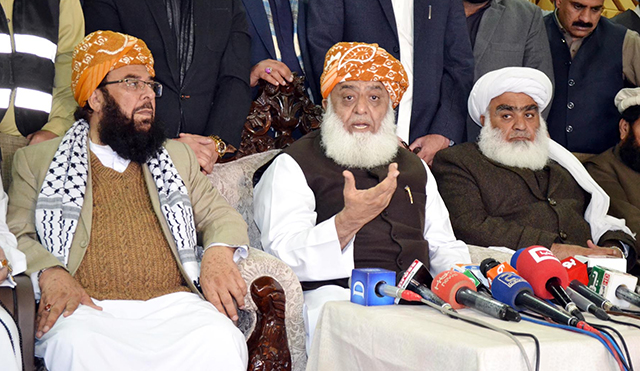 QUETTA: The central head of Jamiat Ulema-e-Islam, Maulana Fazl-ur-Rehman has said that December is the last month of the government tenure, as Prime Minister Imran Khan will have to resign.

QUETTA: The central head of Jamiat Ulema-e-Islam, Maulana Fazl-ur-Rehman has said that December is the last month of the government tenure, as Prime Minister Imran Khan will have to resign.
“The current rulers should go to Europe and live luxurious life, this is not their cup of tea to govern the country. The matter Chief of Army Staff’s extension went to court due to stubbornness of government, which made the country laughing stock,” Maulana Fazal Ur Rehman said while addressing a press conference in Quetta on Sunday.
Fazal Ur Rehman said that foreign forces want to suppress the country’s political leadership in order to sabotage CPEC project. PANAMA scandal was part of the conspiracy, US misconduct and statements has also affected put Pak-China relationship.
On this occasion, Senator Maulana Abdul Ghafoor Haidri, the central secretary general of Jamiat Ulema-e-Islam, was the provincial rich and member of the National Assembly, Maulana Abdul-Wasa.  including National Assembly Maulvi Kamal-ud-din, Member Provincial Assembly Malik Alexander Advocate, Syed Fazal Agha, Asghar Ali Tareen, provincial spokesman Dilawar Kakar, Amir Abdul Rahman Rafiq of Quetta district, Maulana Fazal-ur-Rehman said. Nevertheless,
Maulana said that just one year of the government has passed, but situation has deteriorated from bad  worst. Economy situation is alarming, all firms are failing, industries are closed and productivity is declining, business community is thinking of shifting its capital abroad, traders are worried while the organisations are being terminated millions of people, who have become unemployed till now.
“The general public is unable to buy rations, bread, vegetables, necessities due to inflation. All the privileges of the staff working on the ships have been abolished while the shipping corporation Pakistan has fell down due to which the coast is deserted,” Maulana said.
He further said that if things went like this, country will break like the Soviet Union. “It is all because of the incompetent of the government or is the country being bankrupted on a particular agenda?” Maulana asked.
He said that Pakistan’s foreign policy is constantly failing. The Kashmir issue was the most important point of Pakistan’s foreign policy which has become third level priority. The political system in the country is unstable,  people have no confidence in parliament. The Azadi march was a the most historic demonstration, which was attended by every section of society and party.
“There is no benefit to maintaining a system that cannot save the country nor can it be straightforward to destroy the country without hope of improvement from the government and the system. We have decided to fight for the issues of the people,” Fazal Ur Rehman said.
He said that the issue of extension of the term of the Chief of Army Staff due to the government’s stubbornness has gone to such an extent that the government has shown proof of its incompetence. The leadership was dragged into court, which made Pakistan laughing stock around the world and later justified that the hostile media had given coverage to the case.
“It is just a conspiracy theory that the media around the world, as coverage to this issue was given because it was a very important issue,” Fazal Ur Rehman said while added that only parliament of genuine public representatives should do legislation regarding the extension of Army Chief.
“Only by getting rid of the mafia in power, it can go to a stable political system. The country needs serious, popular, transparent leadership that can run the country towards prosperity. “All the political parties are united and backing our demand,” he said.
Fazal Ur Rehman said that government ministers can only say ridiculous things. They can make matters worse but they are not able to fix the problems. “I think December is the last month of the government,” Maulana Fazlur Rehman added.
He said that there is no agreement or dialogue with neither the government nor the government is capable of negotiating. In the past, serious political leadership promoted democracy which still exists today. “I consider the offer regarding Balochistan government to be insignificant and irrelevant, so there will be no talk on the subject, nor is it a serious matter to be considered,” he said.
In response to a question, Maulana Fazlur Rehman said United States must make statements over CPEC carefully, as it can hurt relationship between Pakistan and China. “Pakistan is free country and can make decisions based on its own interests. The attitude and statements of the US is wrong. China is a 70-year-old friend of Pakistan. In the past, foreign forces have pushed to exert political leadership in the country in order to damage CPEC project.
He said that the decision of Nawaz Sharif’s return would be related to the opinion of doctors. We pray for his recovery.