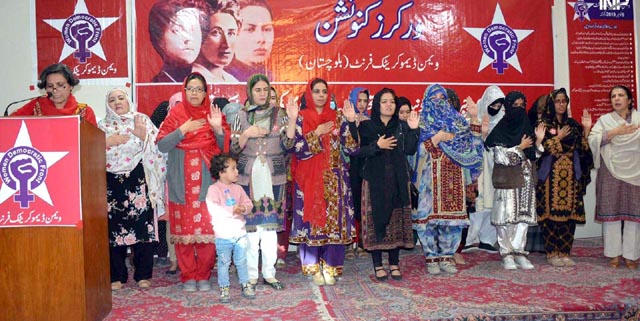 While speaking at Quetta Press Club on workers’ convention of WDC, central leader of WDF Ismat Shahjahan said they are unifying the progressive and secular forces in the country to begin women independent movement against exploitation of women, barbarity, killing in the name of so-called honor.

“Some forces are conspiring against women’s educational and political activities,” she said while addressing the participants. “As for University of Balochistan video scandal, we want a transparent result on women sexual harassment test.”

The WDF Balochistan chapter Jalila Haider regrettably said a great number of children in Balochistan are out of schools, working class is deprived of basic rights, and conspiracies are being hatched against women getting education.

Ismat Shahjahan said through barrel of guns and violence ideologies have reached in the streets, houses, and mohallas. “Today’s convention is to begin an organized movement in the right direction,” she further added.

Social, political activists, and people, including belonging to other walks of life also attended workers’ convention of WDC.