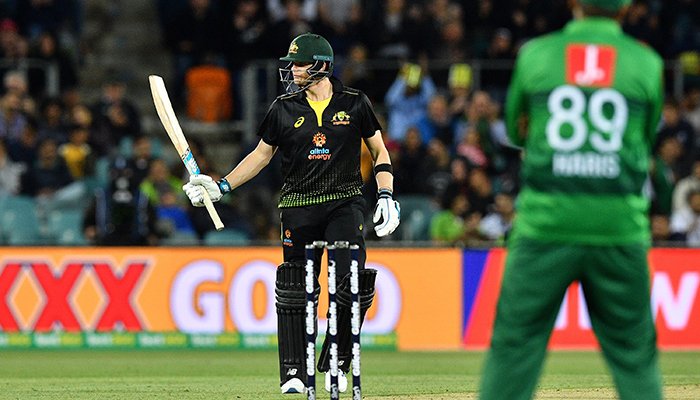 Defending a modest 151-run target, the Pakistani bowlers managed to get rid of two out of three danger men in the former of captain Aaron Finch and David Warner but could not do the same to Smith, who made them pay the price.

Babar Azam won his first toss as the Pakistan captain and had no hesitation in opting to bat first.

He named the same line-up that shared the spoils with the hosts in the rain-marred opening T20I on Sunday.

As expected Azam and Fakhar Zaman opened the batting for Pakistan, whereas Mitchell Starc and Kane Richardson shared the new ball for Australia.

After a quiet opening over, Azam looked to have continued from where he had left on Sunday, smashing back-to-back boundaries off of Richardson’s bowling in the second over.

While Azam looked exquisite, Zaman looked wretched again, slicing one straight to mid-off in the fourth over bowled by Pat Cummins. This time he scored a mere two runs and ate up seven balls.

Next man in was Haris Sohail (6 off 9 balls) but he did not stay in the middle for long. The leftie cleared his front leg, attempted and ugly shot and top-edged Richardson who accepted the catch off his own bowling. He had gotten out pretty much the same way in the first T20I.

In came former captain Sarfaraz Ahmed’s replacement: Mohammad Rizwaz. Him and Azam had rescued Pakistan in the first T20I and the ask of them was the same again. The two batted cautiously and helped Pakistan complete their 50 in the 9th over.

The duo’s 33-run stand was over in the 10th when Rizwan was stumped out by Ashton Agar.

Asif Ali, another frequent failure, walked in and did not last long. He attempted a slog only to find the long one fielder. When he departed in the 11th over, Pakistan were 70-4 and reeling.

Iftikhar Ahmed, who had impressed in the home series against Sri Lanka, walked in and impressed again. When boundaries had dried up, he found a few in the 15th over to put some torque in the innings.

The 36-run partnership was looking good when Azam was run out via a direct hit. He departed but again contributed a 38-ball 50.

But Iftikhar continued to hit whenever he found an opportunity — his innings aided by a dropped catch. He completed his maiden T20I fifty off just 29 balls in the penultimate over of the innings.

Mohammad Irfan and Imad Wasim shared the new ball for Pakistan, whereas the usual pairing of Aaron Finch and David Warner opened the innings for the hosts.

Wasim, usually measured and difficult to hit, looked ordinary in his first over as he conceded four boundaries to Warner.

Amir, usually lethal and dangerous, looked his usual self. He bowled out the dangerous Warner (20 off 11 balls) whose four-match unbeaten run was finally over.

But the thing with Australia is that they do not have a danger man but danger men. Steve Smith walked in.

Smith and Finch were casually taking Australia towards the 50-mark when Irfan bowled an incredible sixth over, giving up just one win and also removing the Aussie captain.

And just as expected, Smith nonchalantly slipped into the anchorman role, with Ben McDermott alongside him.

Imad Wasim trapped McDermott LBW but Australia’s grip on the game did not loosen up, thanks to Smith, who brought up his 50 in the 15th over.

With Smith in the middle, Pakistan practically had no chance. The hosts triumphed by seven wickets and nine balls to spare.