Fazl extends deadline for PM Imran’s resignation by a day 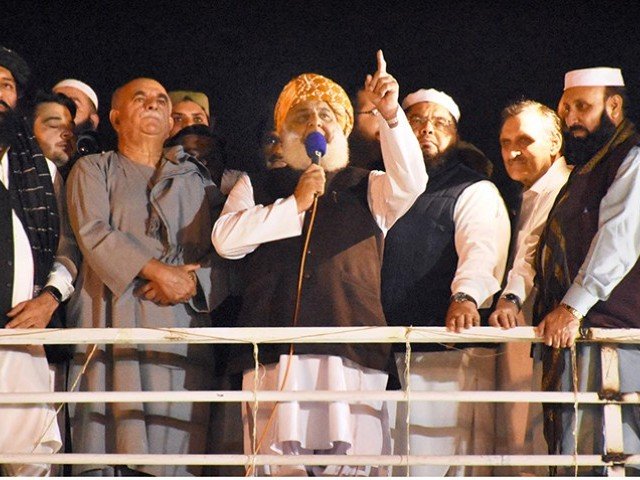 ISLAMABAD: Thousands of protesters, under the rallying banner of Jamiat Ulema-e-Islam-F’s (JUI-F) Maulana Fazlur Rehman and other opposition parties, have converged on the federal capital, seeking to send packing Prime Minister Imran Khan-led government, which they term ‘fake and selected’.

ISLAMABAD: Thousands of protesters, under the rallying banner of Jamiat Ulema-e-Islam-F’s (JUI-F) Maulana Fazlur Rehman and other opposition parties, have converged on the federal capital, seeking to send packing Prime Minister Imran Khan-led government, which they term ‘fake and selected’.

Addressing the gathering of Azadi March, he said they have to give right of vote to this nation. He said today only one city is locked and in future entire country can be locked.

“They are asking us to go and file complaints with the election commission,” he said. “Election Commission is even more helpless than us,” he added.

He said that if the election commission was not so helpless, such a large crowd wouldn’t have assembled in Islamabad.

“We have decided not to go to any court or election commission,” he said. “Only a parliamentary committee will decide about rigging.”

Fazl said that a case of the PTI s foreign funding was being heard by the Election Commission since the past five years but no verdict had been given on it. “If it couldn’t t decide about the foreign funding case then what decision can the ECP give on other matters,” he wondered.

“These rulers will have to go,” he said. “You will have to give these people the right to vote.” Fazl said that D-Chowk was quite a small place for such a gathering.

“H-9 is an open space–D-Chowk is quite small for a gathering like this,” he said. “Whatever decision we make, we will do so with consensus with all opposition parties,” he said.

Fazl said that today the entire city had been closed down but he could shut down the country as well.

“We will shut down the entire country as well and continue our war,” he said.

Fazlur Rehman says institutions have strayed far from the boundaries laid out for them within the Constitution.

“Our army is becoming controversial. We cannot see it becoming so.”

Rehman said that even the Supreme Court chief justice has pointed this out. “Every institution is crossing its boundaries and interferring where it shouldn t.”

He asked the participants to trust their leadership as it will take best decision for them, adding that the movement to oust the premier “will continue to move ahead and will never be on the back foot”.

“We have a Plan B, a Plan C. This is only Plan A. Your jails will fall short of space.” Fazlur Rehman said to retreat is “equivalent to a major sin” at this point.

The meeting discussed the Rehbar Committee’s recommendations including resignations, shutter down strike across the country and countywide wheel-jam strike.

The JUI-F chief has decided to summon an All Parties Conference (APC) on the issue of sit-in, while head of the Rehbar Committee Akram Durrani has been tasked to contact the opposition parties for the APC.