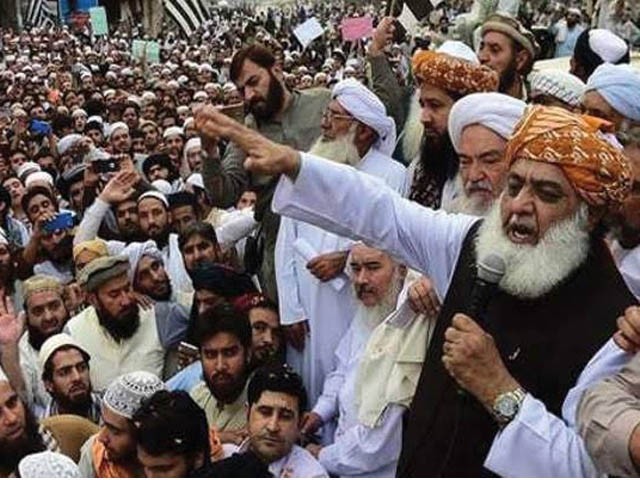 ISLAMABAD: The participants of Jamiat Ulema-e-Islam-Fazl (JUI-F) Azadi March on Sunday were waiting for the party leadership to announce future course of action as Fazlur Rehman’s deadline to Prime Minister Imran Khan to resign within two days ends tonight.

ISLAMABAD: The participants of Jamiat Ulema-e-Islam-Fazl (JUI-F) Azadi March on Sunday were waiting for the party leadership to announce future course of action as Fazlur Rehman’s deadline to Prime Minister Imran Khan to resign within two days ends tonight.

Fazlur Rehman’s deadline ends tonight raising the stakes in a protest campaign that the government has denounced as a threat to democracy.

A meeting with JUI-F’s Fazlur Rehman in chair is underway to discuss if they would march towards D-Chowk or not. The meeting is also holding consultations on the future strategy.

On the other hand, the government while tightening the security arrangements, blocked the roads leading to the Red Zone. Around 8000 police personnel have been deployed from Zero Point to Red Zone and tear gas canisters, Shields and other items have been provided.

The district administration and police have blocked the Serena Chowk, Nadra Chowk, Express Chowk, Marriot and Bari Imam by parking containers filled with dust.  Pakistan Army and Rangers have been deployed at the sensitive buildings.

DIG Operations Waqarud Din Syed said that they were ready to deal with any situation.

Earlier, the opposition’s Rehbar Committee had recommended a plan to shift the protest venue to D-Chowk, resignation of opposition members of the National Assembly, blocking highways and indefinite shutter-down strike to cripple functioning of the federal government.

Fazl gave PM Khan two days to resign or else he said: “We will be forced to think of another strategy”.  Fazl, while welcoming the leaders of political parties in Azadi March, said they [the protesters] would not be able to exercise patience after two days.

The JUI-F chief said this was not a gathering of any single political party but a gathering of whole nation, adding that the nation has stood against the government on one platform. He further said: “We do not accept results of 2018 general elections.” On Saturday, the JUI-F chief vowed to topple the ruling regime and run the country.

Addressing the participants of the Islamabad sit-in, he said that writ of the incumbent government has ended and now “we will run the country”. He said: “We will provide satisfaction and protection to the country.” Fazl asked the government to “step down and don’t test our patience”. He vowed to continue protest until the toppling of the government.