Whitewash an eye-opener for us as well as critics: Misbah-ul-Haq 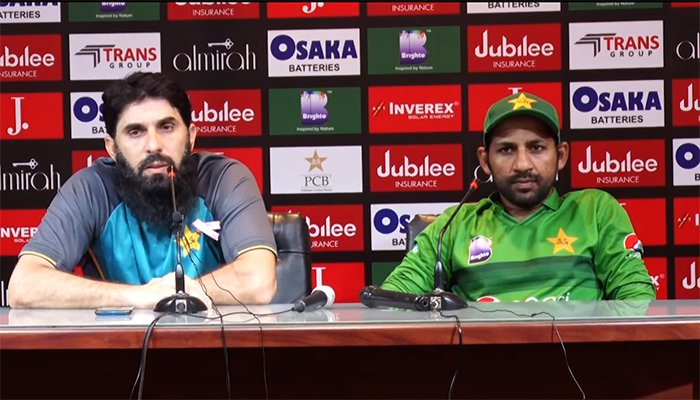 Pakistan head coach Misbah-ul-Haq on Wednesday said that the 3-0 whitewash to Sri Lanka in the T20I series was an eye-opener for the team as well as their critics.

Pakistan head coach Misbah-ul-Haq on Wednesday said that the 3-0 whitewash to Sri Lanka in the T20I series was an eye-opener for the team as well as their critics.

“We did not play good cricket throughout the series. The result is an eye-opener for everyone. This also tells us what we need to work on for future series,” said captain Sarfaraz Ahmed, who sat alongside Misbah in a press conference at the Gaddafi Stadium Lahore and invited questions from media personnel.

Sarfaraz, who came in to bat at number four and scored 17 off 16 balls before throwing away his wicket, appeared to pin the responsibility of the failed run chase on his partner Haris Sohail.

“The pitch was such that we were not able to hit right away. The plan was for me and Haris to bat together but then he got out and the next batters needed time to settle,” he said.

The catch I dropped did not hurt the team: Sarfaraz

Head coach and chief selector Misbah also came to the skipper’s rescue. When a journalist questioned the Karachi native’s performance, he sarcastically replied: “Yes, just the wicketkeeper is not performing. The rest are doing fine.”

Misbah said he takes the responsibility of the historic defeat but was quick to remind that he took over the set up just recently.

“Of course, the responsibility falls on me but this is the same team that has been playing for four years. How much would I have coached in 10 days?”

Nonetheless, Misbah admitted that his team was outplayed by the tourists.

“The performance of the Sri Lankan teams is an example for us. They outclassed us completely. We did not beat them in any of the three departments. All matches and the series were one-sided. We need to find the answers to a lot of questions. This was disappointing,” he said.

The head coach said that the team missed veterans Mohammad Hafeez and Shoaib Malik, who he said were hounded by the media following the World Cup.

“This was an eye-opener for us and you as well. The way we go after the seniors. What we did in the World Cup. We forget their performances. These two (Hafeez and Malik) play the spinners so well and we had this problem for the entire series. We were unable to pick their leg spinner,” he said, hinting that we may not have seen the last of the pair.

Misbah also came to the surprising misfiring Babar Azam, saying: “Babar was unable to time the ball but to say that he was playing for himself is unfair. Sri Lanka were bowling fine and we could not adapt ourselves to the pitch.”

‘Abid Ali doesn’t have stats for T20Is; Zaman has’

Similarly, he rejected the insinuation that Fakhar Zaman had been underperforming. “People should think before asking questions. If Fakhar Zaman has performed just once [since the Champions Trophy final], then how come his average is of 47?”

He also said that Abid Ali does not currently have the T20I stats to warrant a place in the side. “How do I pick him when he averages 20 and his strike rate is 104.”

“If I pick him based on these numbers you’d shoot me,” he quipped.