Vitamin A supplements can save a child’s life 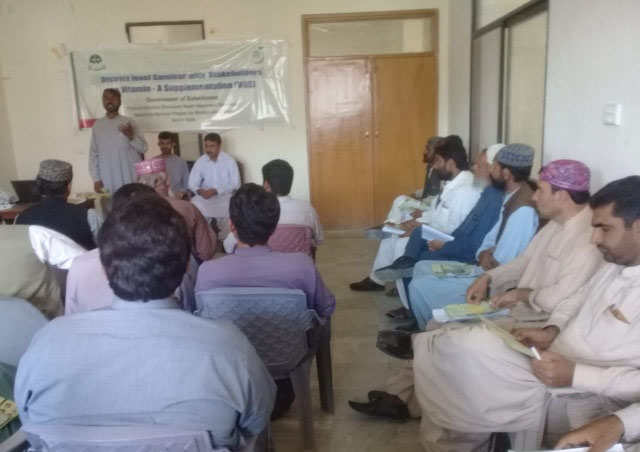 QUETTA: Balochistan Nutrition Program for Mothers and children organized a district Level Seminar on Vitamin- A supplementation (VAS) for Partners Advocacy and sensitization at DHQ Kohlu on Monday.

QUETTA: Balochistan Nutrition Program for Mothers and children organized a district Level Seminar on Vitamin- A supplementation (VAS) for Partners Advocacy and sensitization at DHQ Kohlu on Monday.

On this occasion the DNO kohlu welcomed the participants, he said in his opening remarks, the Vitamin A deficiency is the leading cause of preventable childhood blindness and increases the risk of death from common childhood illnesses such as diarrhea, he further stated, in infants and children the vitamin A is essential to support rapid growth and to help combat against infections.

He said  In many countries where vitamin A deficiency is a public health problem, vitamin A supplements are provided to children 6–59 months of age to reduce the risk of illness and deaths, number of children aged 6 to 59 months left unprotected more than tripled in high-mortality in countries during this period,

District Coordinator EPI Aqil Baloch said, Vitamin A deficiency (VAD) has been recognized as a public-health issue in developing countries. Economic constraints, sociocultural limitations, insufficient dietary intake, and poor absorption leading to depleted vitamin A stores in the body have been regarded as potential determinants of the prevalence of VAD in South Asian developing countries and UNICEF initiated the supplementation of Vitamin- A in Pakistan since 2000 with polio campaigns,

OTP supervisor PPHI Azam jan presented multimedia presentation on Vitamin-A drops polio NID campaigns, he said Vitamin A is important for visual health, immune function and fetal growth and development as well, Vitamin A deficiency is a public health problem in many parts of the world. It can cause visual impairment in the form of night blindness and, in children, it may increase the risk of illness and death from childhood infections, including measles and those causing diarrhea.

As closing remarks The chief Guest of the seminar Dr. Attaullah Marri MS DHQ kohlu said, it is a great honor for us that the Nutrition Program in kohlu is working for raising awareness among the masses on mothers and child health status in Nushki, she said the Postpartum women should be encouraged to receive adequate nutrition, which is best achieved through consumption of a balanced healthy diet.

At the end of seminar Haji Azam Sherani Marri said, the Vitamin A supplementation is a global health strategy to eliminate vitamin A deficiency and its tragic consequences and he paid thanks to the meeting participants.

Event was ended with vote of thanks by DNO kohlu.