Shutter-down strike in Kech against lawlessness 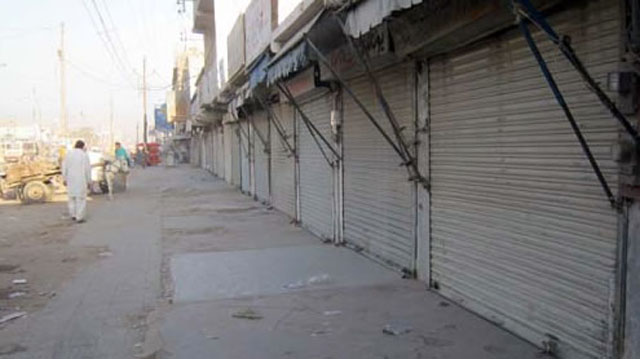 QUETTA: All Parties and Activist Alliance District Kech (APAADC) and Trader Association of Turbat have announced to observe a shutter down strike in Kech district against the increasing incidents of lawlessness.

QUETTA: All Parties and Activist Alliance District Kech (APAADC) and Trader Association of Turbat have announced to observe a shutter down strike in Kech district against the increasing incidents of lawlessness.

They have warned that if incidents of thefts were not stopped and accused involved in such incidents were not arrested they would extend their protest to divisional and provincial levels.

They said that during last couple of weeks the incidents of theft, dacoits and murders had been increased to an alarming level upon which APAADC held protests and meetings with authorities concerned. “We also held meeting with provincial home minister and IG Police Balochistan and apprised them the whole situation but no practical steps have been taken so far except rhetoric,” they claimed and added that they extended all cooperation with administration and gave it appropriate time but no positive development had been made in this regard.

They said that other than protest they had no other choice thus all political parties, civil society and traders had unanimously decided to record their protest through democratic manner. “On October 14th shutter down strike will be observed if the accused were not apprehended then all parties will expand protest to provincial level,” they added.

They regretted that despite installation of CCTV cameras on all streets and set up of security check posts scot- free movements of anti-social elements was a matter of great concern. “Kech Bar Association has also supported the shutter down strike call,” they said.