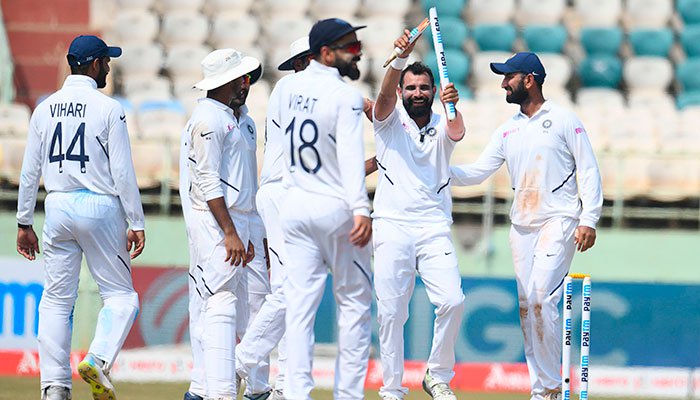 VISAKHAPATNAM: Mohammed Shami and Ravindra Jadeja took nine wickets between them as India outplayed South Africa, winning by 203 runs on the final day of the first Test on Sunday.

VISAKHAPATNAM: Mohammed Shami and Ravindra Jadeja took nine wickets between them as India outplayed South Africa, winning by 203 runs on the final day of the first Test on Sunday.

Set a daunting target of 395, the tourists were bundled out for 191 in the second session in Visakhapatnam, giving India a 1-0 lead in the three-match series.

Dane Piedt (56) and debutant Senuran Muthusamy (49 not out) put on 91 runs for the ninth wicket to frustrate the Indian bowlers after the visitors had slipped to 70 for eight.

Shami got last man Kagiso Rabada caught behind for 18 to trigger celebrations in the Indian camp.

Rohit Sharma put India in a commanding position with a century in each innings on his debut as a Test opener — a first by any batsman in Test history.

His knocks of 176 and 127 coupled with a fine 215-run innings by Mayank Agarwal helped Virat Kohli’s India maintain an upper hand in the game.

Shami took three key wickets in the morning session including that of skipper Faf du Plessis for 13 to dim South Africa’s hopes of saving the game.

Jadeja soon joined forces to run through the middle order with three wickets in one over including overnight batsman Aiden Markram (39) with a one-handed return catch.

The Proteas resumed the day on 11 for one and soon the batting came under attack by some inspired Indian bowling on a pitch that offered variable bounce.

Off-spinner Ravichandran Ashwin struck first to clean up overnight batsman Theunis de Bruyn for 10, becoming the joint-fastest to 350 wickets in his 66th Test.

Ashwin, who claimed eight wickets in the match and registered his 27th five-wicket haul on Friday, now shares the feat with Sri Lankan legend Muttiah Muralitharan.

Shami continued with his exploits, bowling Temba Bavuma for nought on a delivery that stayed low.

The veteran paceman came back in his second spell to rattle the stumps of du Plessis, who was leaving the incoming delivery, and Quinton de Kock for zero.

The match also witnessed the most number of sixes — 37 from four innings — surpassing the 35 that were smashed in a game between Pakistan and New Zealand in 2014-15.

Rohit Sharma — India’s limited-overs star — got 13 of those sixes, the most in a five-day game by one batsman, breaking Wasim Akram’s record of 12 for Pakistan.

South African opener Elgar also made an impression with his 160 in his team’s first innings total of 431 that brought the visitors back in the game.

The second Test will begin on October 10 in Pune.