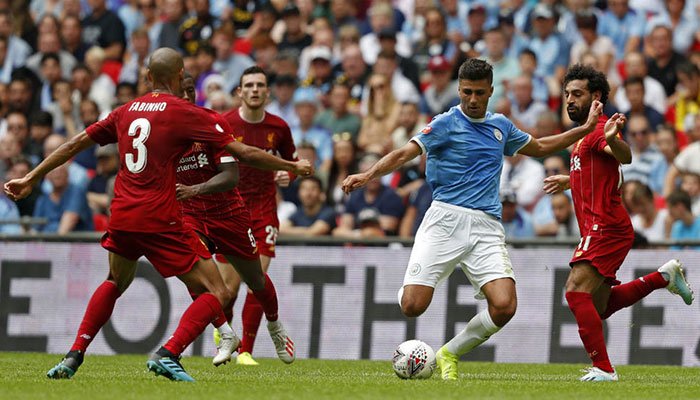 LONDON: Liverpool can rub more salt into Manchester United wounds with a first victory at Old Trafford in five years on Sunday, while Manchester City will try to haul themselves back onto the leader´s coattails with victory at Crystal Palace.

LONDON: Liverpool can rub more salt into Manchester United wounds with a first victory at Old Trafford in five years on Sunday, while Manchester City will try to haul themselves back onto the leader´s coattails with victory at Crystal Palace.

Just eight games into the season, 15 points separates Liverpool at the top of the table from United down in 12th.

The European champions have shot into an eight-point lead even over their closest challengers in City, thanks to a run of 17 straight Premier League wins stretching back to last season.

By contrast, United have won just two of their last 13 league games.

However, Ole Gunnar Solskjaer has called on his players to rise to the occasion of a clash between the two most successful sides in English football history.

“I always look at the next game as a chance. The Liverpool game is a great chance for us to go the other way,” Solskjaer told Sky Sports.

“It´s in my nature to think of the best-case scenario. I know the fans and the players will be up for it.

“We need to step up to the plate, and these are the big games that you sign up for at Man United – you have to show your quality.”

Jurgen Klopp celebrated his fourth anniversary at Anfield earlier this week, but for all the German´s achievements in transforming Liverpool´s fortunes, he his yet to taste victory at Old Trafford.

Liverpool have not won on their past six visits to United and left-back Andy Robertson warned that form will not count for much given the historical rivalry between the sides.

“I don´t think it matters what your form is like in these games. It doesn´t matter that we´ve won eight on the bounce and they´re struggling. It´s Man Utd v Liverpool,” said the Scotland captain.

“It´s genuinely a different atmosphere when you play against them.”

In contrast to United´s misfortune, Liverpool have been handed an injury boost with the news Joel Matip is fit to return at centre-back, but Mohamed Salah remains a doubt after suffering an ankle injury in a 2-1 win over Leicester before the international break.

City must bounce back to winning ways after a shock 2-0 home defeat to Wolves two weeks ago to at least apply some pressure on Liverpool when they visit Crystal Palace on Saturday.

The champions badly missed Kevin de Bruyne a fortnight ago and should have the Belgian international back from a groin strain as they look to become the first visiting side to win at Selhurst Park this season.

City have scored 25 goals in the six Premier League games De Bruyne has started this season, but been beaten in two matches he has not.

Palace have confounded pre-season predictions to sit level with fourth-placed Leicester and Chelsea on 14 points.

The international break may have come at the right time for Tottenham after a 3-0 thrashing at Brighton followed a humiliating 7-2 defeat by Bayern Munich in the Champions League.

Spurs have won just three of their opening 11 games in all competitions, but the visit of Watford this weekend could offer some blessed relief for Mauricio Pochettino´s men.

The Hornets are the only side yet to win in the league this season and sit rock bottom of the table having conceded 20 goals in their opening eight games.

“We need to start believing in ourselves again. We have the quality in the squad and can fight for everything,” said Pochettino.

“We are still there, we have one point more than last season in the Champions League and we are three points from the top four.”