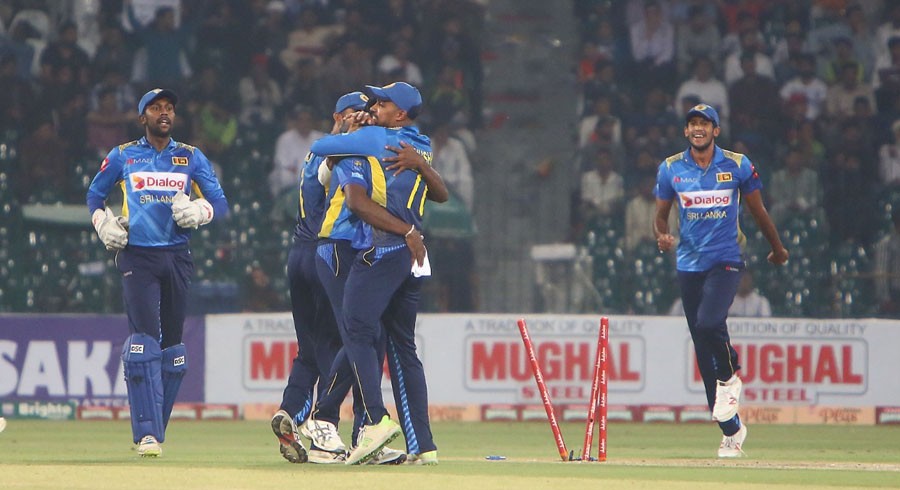 A dominant Sri Lanka side overpowered Pakistan to a three-nil whitewash after defeating the Men in Green in the third Twenty20 International (T20I) between the sides at the Gaddafi Stadium in Lahore on Wednesday.

A dominant Sri Lanka side overpowered Pakistan to a three-nil whitewash after defeating the Men in Green in the third Twenty20 International (T20I) between the sides at the Gaddafi Stadium in Lahore on Wednesday.

Chasing a target of 148, Pakistan lost opener Fakhar Zaman early, after being bowled by fast-bowler Kasun Rajitha on the first ball of Pakistan’s innings.

Opener Babar Azam and batsman Haris Sohail then combined to make a partnership of 76 runs to provide a solid platform for the Men in Green.

As the pressure mounted courtesy of a rising required run-rate, Babar tried to provide the impetus but was caught behind by wicketkeeper Sadeera Samarawickrama off the bowling of fast-bowler Lahiru Kumara after scoring 27 runs off 32 deliveries.

Sohail fell soon after, attempting a wild slog, stumped by Samarawickrama off the bowling of leg-spinner Wanindu Hasaranga.

All-rounder Iftikhar Ahmed and tailender Wahab Riaz then tried to slog their way out of trouble but finished 13 runs before the finish line at the end of their allotted overs.

Iftikhar and Wahab remained unbeaten on 17 runs of 8 deliveries and 12 runs off 6 deliveries respectively as the Islanders completed an improbable three-nil series whitewash.

Earlier, Sri Lanka got off to a shaky start with both openers departing in quick succession after winning the toss and opting to bat first.

More wickets followed, as batsmen Bhanuka Rajapaksa, who was awarded player of the match in the second T20I, and Angelo Perera departed in quick succession to leave the Islanders struggling at 58 for four.

The fall of wickets, however, did not hold Sri Lanka back as batsmen Oshada Fernando and Dasun Shanaka combined for a 76-run partnership that provided a solid foundation for the Islanders. Fernando was the main aggressor in the partnership contributing 56 runs off 35 deliveries while Shanaka contributed 12 runs of 25 balls.

Tailender Lahiru Madushanka tried to provide impetus to Sri Lanka’s innings but was caught by fielder Ifitkhar Ahmed off the bowling of Amir.

Fernando continued his fine form and remained unbeaten after scoring 78 off 48 deliveries to propel the Islanders to 147 for seven in their allotted overs.