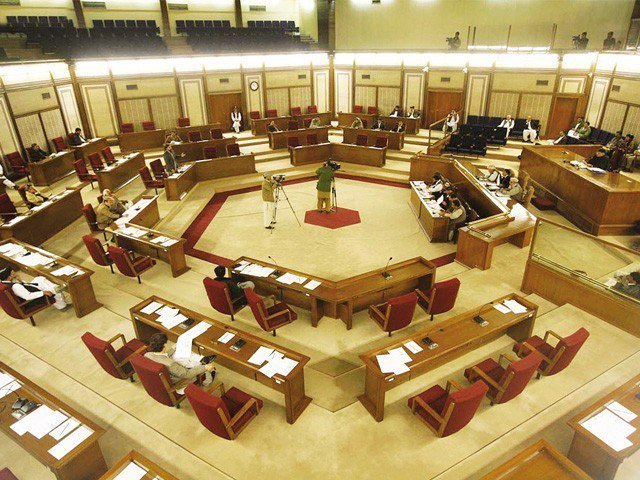 QUETTA: Opposition  members in the Balochistan Assembly while taking in part in debate on an adjournment motion about law and order demanded that a fact finding committee comprising  parliamentary parties representatives should be formed for probe into increasing terror attacks and other incident happening in the province.

QUETTA: Opposition  members in the Balochistan Assembly while taking in part in debate on an adjournment motion about law and order demanded that a fact finding committee comprising  parliamentary parties representatives should be formed for probe into increasing terror attacks and other incident happening in the province.
However, debate on the adjournment motion of Nasarullah Zerey of Pashtoonkhawa Milli Awami Party (PkMAP) could not be completed as Speaker Mir Abdul Qudoos Bizenjo who was presiding over the session adjourned the session due to lack of Quorum which was pointed out by the PHE Minister Noor Muhammad Dummor while Fazal Agha of JUI-F was speaking the motion.
The adjournment motion on law and order situation had accepted by the speaker in the last session of Balochistan Assembly and fixed October 12 for general debate on it.
Members of the opposition parties and Speaker Mir Abdul Qudoos Bizenjo expressed their reservation over braking quorum of the house by the treasury benches and said that the Home Minister was absent from house when important adjournment motion was under discussion.
The mover of the adjournment motion Nasarullah Zerey of PkMAP while taking floor expressed his serious concern over the deteriorating law and order situation in the province and said that during last 10 months over a dozen terrorist attacks and bomb bloats took place that claimed many precious lives and injuring dozens of people including, political leaders, security personnel and common citizens in Quetta, Loralai, Chaman, Qila Saifullah and other towns and cities of the province.
He said that the government has allocated over Rs. 40 billion for law and order but despite spending huge amount the law and order was not satisfactory and every day such incident are being reported in different areas of the province. He said that Harnai was very much disturbed where a contractor was kidnapped and killed. Duki incident was also taken place but government nit taken action against Assistant Commissioner.
He said that despite promise, the government did not arrange in-camera briefing over terrorist activities. He said that a fact finding committee should be formed for probe into these incidents. “Need of the hour is to unveil the real culprits behind these terrorist activities and crimes in Balochistan” Nasarullah Khan Zerey said adding that it has become essential to implement National Action Plan with its full Spirit in Balochistan.
He said that government was doing political victimization and had registered over 250 cases in one year on political workers of different parties. Among 250 political cases, three cases were also registered against him.
The Provincial Minister Noor Muhammad Dummar while speaking at the adjournment said that the incidents of terror attacks, bomb blast and other incident are regrettable. However, he said that the law and order situation was improved to great extent during last one yaer with the joint efforts of government security forces. He said that security forces have rendered great sacrifices in this regard.
He said that the government was making all out efforts to further improve law and order. However, he said that compare to former government era the situation was improved 99 percent. “Those who speak against the National Security Institutions of the Country are equally liable to punish along with those who morally and financially supports and provide assistance to the terrorists” Dummar remarked.
Syed Fazal Agha while speaking on the motion said that Pakistan was facing conspiracy hatching by anti-Islamic forces to destabilize it. He, however, expressed his dissatisfaction over the law and order situation. He also demanded probe into the terrorist incident taking place in the province. The speaking adjourned the session during his speech when Provincial Minister pointed out lack of quorum in the
house.
Six different Bills were tabled before the house for approval.
Assembly approved five bills after debate and discussion including bill regarding Balochistan Welfare and Donors organizations Regulation and Registration; Mental Health Bill 2019; Balochistan Education Foundation bill 2019 with amendment, Balochistan Private schools registration and regularization bill and Balochistan boards of Intermediate and Secondary Education bill of 2019. Bill regarding housing and urban planning was handed over to the concerned committee of the house for further consultation.