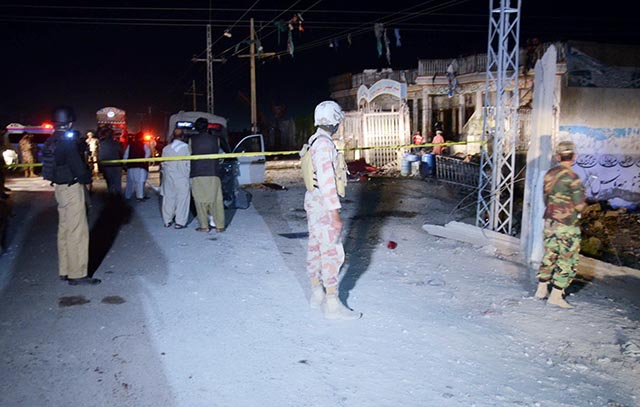 QUETTA:-A volunteer of Chhipa Foundation was killed and nine others were injured in two bomb blasts took place near Khaizai Chowk area of western bypass, late on Thursday night.

QUETTA:-A volunteer of Chhipa Foundation was killed and nine others were injured in two bomb blasts took place near Khaizai Chowk area of western bypass, late on Thursday night.

Injured include two senior police officers, a TV reporter and Cameramen in the second blast. Police said that first blast took place near the office of a transport company, injuring four people. Soon after the blast police and personnel of other security forces rushed to the site and started investigation.

Police and Bomb disposal team was busy in investigation of the first blast during that a second powerful explosion occurred at the same site, resulting in injuring seven people including Station House Officers of two police stations. “A volunteer of Chhipa rescue team was killed in the blast,” DIG Quetta, Abdul Razzaq Cheema said, adding that two sub-inspectors of Airport and Kharotabad police stations and three other security personnel, including two officials of Bomb disposal Squad injured.

Soon after the second blast more police and FC personnel rushed to the site and shifted the injured to Civil Hospital and Bolan Medical College Complex hospitals. “We received one body and nine injured in both the hospitals,” Dr. Wasim Baig, spokesman for the Civil Hospital Quetta said, adding that after initial treatment the TV reporter Ibrar Ahmed and Cameraman Rehmat Ali were also shifted to civil hospital from BMC.

Police said that in the both explosions explosive device was used. In the first blast IED planted near the office of transport Company while for the second explosive laden motorcycle was used that was parked close to the canteen of the transport company. “Devise fixed in the motorbike was detonated with remote control,” MR. Cheema said. The offices of the transport company and nearby buildings were badly damaged in the twine blasts.

Police and other security agencies were investigating the two blasts. However, no one has claimed responsibility of the blasts till late night