Zehri quashed allegations of his involvement in Zarakzai’s murder 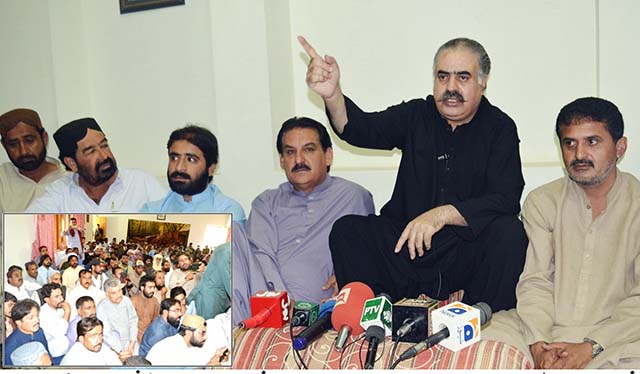 QUETTA: Former Chief Minister Balochistan and Chief of Jhalawan Nawab Sanaullah Zehri on Wednesday quashed allegations regarding his involvement in killings of Nwab Amanullah Zehri and his grandson.

QUETTA: Former Chief Minister Balochistan and Chief of Jhalawan Nawab Sanaullah Zehri on Wednesday quashed allegations regarding his involvement in killings of Nwab Amanullah Zehri and his grandson.

“Amanullah Zarakzai was nominated in martyrdom of my sons but neither me nor my family member involved murder of Amanullah Zarakzai and his grandson.” Sanaullah Zehri said while addressing a news conference on Wednesday in Khuzdar added I quashed all allegations against me and my family.

Nawab Zehri announced to call a tribal Jirga comprising on Jhalawan and Sarawan tribes in order to unveil conspiracies being played against him and his tribe.

He said when I was Chief Minister I didn’t attack my uncle Amanullah Zarakzai, so how come I could do this when I have no power.

“People of Balochistan knew that Anti-Terrorist Court nominated slain Amanullah Zarakzai in murder of my sons but being Senior Provincial Minister and then Chief Minister I didn’t use my influence in courts’ proceedings.”

“Akhtar Shahezai has crossed all limits but his vicious ambitions against Zehri tribe could ignite another bloodshed in Balochistan.” Nawab Zehri said added I have immense respect for Mengal tribe but Shahezai family remained involve in conspiracies against Zarakzai family.

Replying to a query former Chief Minister said, without any investigation, FIR had been lodge against me and my family but I want to tell CM Jam Kamal that still we are ready to face courts because without evident proofs no one should point out fingers upon my family.