Trump once again offers to mediate on Kashmir 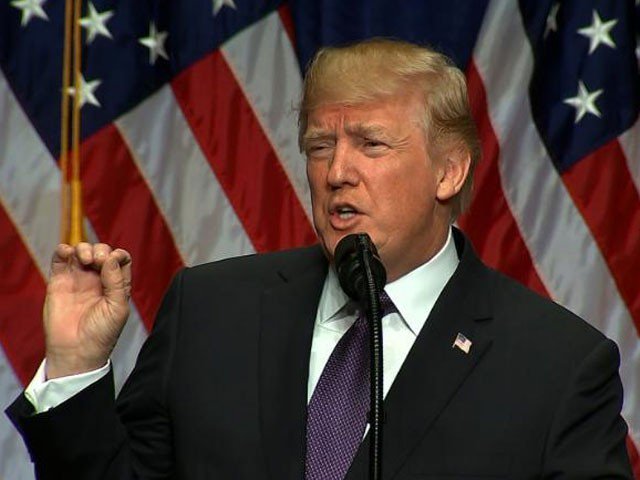 WASHINGTON: US President Donald Trump on Tuesday once again offered to mediate the “explosive” situation in Kashmir.

WASHINGTON: US President Donald Trump on Tuesday once again offered to mediate the “explosive” situation in Kashmir.

Long a flashpoint between nuclear armed India and Pakistan.

Trump said he would raise the matter over the weekend with Indian Prime Minister Narendra Modi as the pair are set to meet at the G-7 Summit in France which kicks off on August 24.

He said that Washington has urged to act to ease tensions in the Himalayan valley.

“Kashmir is a very complicated place. You have Hindus and you have the Muslims and I wouldn’t say they get along so great,” Trump told reporters. “I will do the best I can to mediate,” he said.

President Trump’s statement comes in the wake of the US calling for  to quickly release detainees and restore basic liberties in Indian Occupied Kashmir.

“We continue to be very concerned by reports of detentions, and continued restrictions on the residents of the region,” a senior State Department official said.

“We urge respect for individual rights, compliance with legal procedures and an inclusive dialogue,” said the official, who spoke on condition of anonymity after returning from a visit to the region.

Tensions have been high since India revoked autonomous rule in the part of Kashmir it controls on August 5.

Indian authorities imposed a communications blackout and heavy restrictions on movement from the eve of the intervention.

Trump has spoken in recent days by phone with Prime Minister Imran Khan and his Indian counterpart Narendra Modi urging both sides to ease the tensions.

Referring to India, the State Department official said, “We urge respect for individual rights, compliance with legal procedures and an inclusive dialogue.”

“We are aware of India’s concerns but continue to urge that they work as quickly as possible to restore normalcy in the region,” she said.

Washington has called on India and Pakistan, both of whom are nuclear powers, to open a direct dialogue to resolve the Kashmir dispute over the mountainous territory.

Trump has offered to play the role of a mediator, saying Modi had requested his services, an assertion that New Delhi formally denied.