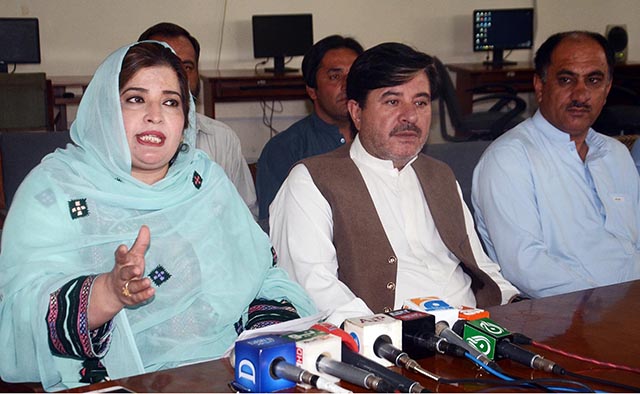 Munawara Muneer shared these views while addressing a press conference at Balochistan Assembly.

“PTI government is trying to fulfill its promises which have been done with public of Balochistan before general election and in this regard, hefty funds were included in federal PSDP for provision of facilities including healthcare, imparting education, supply of water to people of Balochistan”, she said, adding that construction of roads and establishing Shaukat Khanam Memorial Trust (SKMT) Hospital in Balochistan would be initiated soon.

Munawara informed that the federal government had announced Rs 10 billion rupees for Quetta Development Package which would bring prosperity in Balochistan.

She said Balochistan had been ignored in Pak-China Economic Corridor (CPEC) project in tenure of past government but Prime Minister Imran Khan was taking special interest in raising standard of living of people of Balochistan and solving their long standing problems, aiming to remove sense deprivation from Balochistan.

“Central government is taking measures to give special scholarship for Balochistan’s students to get higher education under Higher Education Commission and ensuring implementation of Balochistan’s six percent quota of jobs in federal departments for provision jobs to youth of province”, she said.

She said people confidence have been increased over Prime Minister Imran Khan from initiating measures of Ehsas Program and health card, adding PTI government has focused fully at Balochistan’s all fields in first time history of country.

“People will more get benefits from development schemes after completion of progress projects in country including Balochistan”, she said.‑