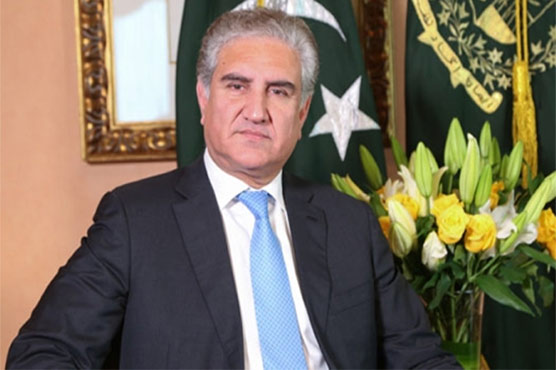 Islamabad is considering ‘other options’ to deal with the deteriorating security situation in the aftermath of India’s illegal move to scrap special status of Occupied Jammu and Kashmir, fearing more bloodshed in the valley.

Islamabad is considering ‘other options’ to deal with the deteriorating security situation in the aftermath of India’s illegal move to scrap special status of Occupied Jammu and Kashmir, fearing more bloodshed in the valley.

“We fear more bloodshed in coming days in Occupied Kashmir,” Foreign Minister Shah Mehmood Qureshi said while addressing a news conference in Islamabad on Saturday. “We are considering ‘other options’ as well… we hope there’s no bloodshed, but we see things moving towards further escalation in tension,” he added.

The minister went on to say that the government does not want to consider ‘military options’. “However, we reserve the right to defend our motherland in event of any misadventure,” he added.

The foreign minister also said China has decided to fully support Pakistan on Kashmir issue amid New Delhi’s attempts to change the demography of the disputed area and ethnic cleansing of Kashmiris.

In solidarity with Kashmiris: National logo for Independence Day launched

Qureshi visited Beijing on August 9-10 and had wide-ranging consultations with the Chinese leadership. He stressed that no unilateral step could change the internationally recognised disputed nature of IOK.

During the visit, the minister highlighted the grave danger posed by illegal Indian actions to regional peace and security and shared deep concern about a total clampdown of IOK by Indian security forces and the humanitarian crisis resulting therefrom.

“As part of its [India’s] reckless approach there could be some false flag operation and Pakistan blamed on the fake pretext of ‘terrorism’,” he underlined, according to a statement issued by the Foreign Office today.

The two sides agreed that they would closely coordinate and consult each other on the evolving developments.

Qureshi, during today’s presser, also made an appeal to the nation to wave Occupied Kashmir’s flag along with Pakistan’s flag to show solidarity with the people of IOK on August 14. “The whole nation should chant slogans of Kashmir banega Pakistan,” he added.

Thousands protest in IOK over new status despite clampdown

The foreign minister said that an increase in the region’s security measures and heightened human rights violations in Occupied Kashmir are two negative consequences of India’s August 5 move.

Qureshi said protests had erupted simultaneously throughout the occupied valley as soon as curfew was relaxed for a few hours in IOK on Friday, adding that there are also reports of deaths in the clashes between protesters and the Indian troops in the valley.

Indian security forces used tear gas and pellets to fight back thousands protested against the move in Srinagar yesterday, injuring at least 30 including women and children.

The demonstration soon after Friday prayers was the largest since authorities locked down the revolt-torn region five days ago, cutting off telephone and internet services and detaining more than 500 political and separatist leaders.

Qureshi, during today’s press conference, said there are also reports of food shortages as curfew entered its sixth day today. “An acute shortage of medicines is an equally important issue,” he added. The minister said that India, on the other hand, is trying to show a rosy picture to the world as if it has done nothing wrong, calling the Kashmir issue its ‘internal matter’.

“Pakistan has the right to intervene because India had attempted to change demography of a conflict region.”

Foreign Minister Qureshi also lauded a positive response from the United Nations chief following his two letters addressed to him one each before and after the August 5 move. “He accepted Pakistan’s historic stance on the dispute in his statement,” he added.