BNP holds the state responsible for tribal feuds in Balochistan 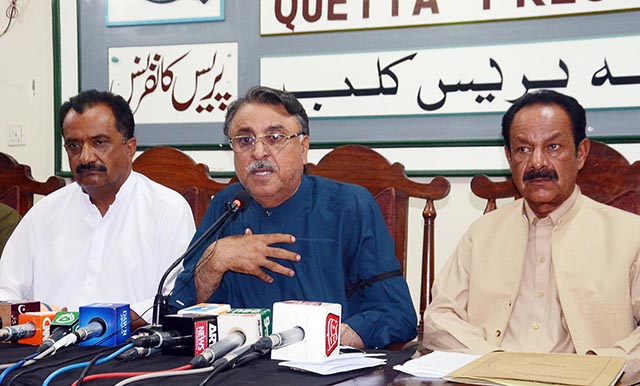 QUETTA: The Balochistan National Party (BNP) holds the state responsible for the tribal feuds in Balochistan.

QUETTA: The Balochistan National Party (BNP) holds the state responsible for the tribal feuds in Balochistan.

Speaking at a crowded press conference at the Quetta Press Club, the senior vice president of the BNP Abdul Wali Kakar links the recent killing of their of their party leader Aman Ullah Zarakzai along his grandson and two body guards in central Balochistan as an open challenge to the state writ.

“On October 25, 2009, the son of leader Amanullah Zarakazai named Riaz Ahmad Zarakzai was killed in broad day light, in the Norgam bazaar of Zeghri, the state did not bring the perpetrators to the book, despite the fact that the First Information Report (FIR) was filled.”

“Had Riaz Zarakzai’s killers brought to just, the recent incident would not have taken place,” laments Kakar while addressing the reporters.

According to the BNP leaders, Amanullah Zarakzai was the son of Nawab Babu Nauroz Khan Zarakzai, who was in the forefront, in the second insurgency (1958), in Balochistan.

“For over last 15 years, these kinds of incidents are frequently taking place in the province due to weakness of the state,” remarks Kakar. “The state has failed to provide justice in such incidents. This is why such incidents’ fate is decided on roads.”

The BNP leader also says that his party will peacefully and decocratically record its protest across the province between 20 August to 29 August. “Our party will observe black day for 3 days and mourn for 10 days,” he concludes the press conference.