‘Unfortunate’ to miss out on semi-final berth: Sarfaraz 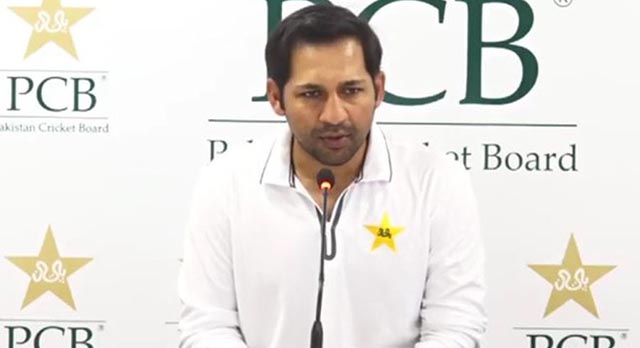 Pakistan captain Sarfaraz Ahmed has said that the Men in Green were unfortunate to miss out on 2019 International Cricket Council (ICC) World Cup semi-finals spot.

Pakistan captain Sarfaraz Ahmed has said that the Men in Green were unfortunate to miss out on 2019 International Cricket Council (ICC) World Cup semi-finals spot.

While addressing media at the National Stadium in Karachi, Sarfaraz said that he was satisfied with the team’s overall performance, although they were unlucky to not feature in the last four due to an inferior net run-rate.

“I think we were unfortunate to miss out on the semi-final spot because of net run-rate,” said Sarfaraz. “We did not play well in the first few matches but made a good comeback in the second half of the tournament. I’m satisfied with the team’s overall performance.”

Despite that victory in their last group match against Bangladesh, Pakistan failed to qualify for the semi-finals as they had an inferior net run-rate compared to fourth-placed New Zealand, who also had 11 points from nine matches.

The wicketkeeper-batsman, who scored 143 runs in eight innings at an average of 28.6 during the 2019 World Cup, was also satisfied with his own performance during the mega event.

“As a captain and as a player I am satisfied with my performance,” he said. “When I bat at my own number, I tend to perform well.”

“News of disagreements between Mickey and I during the World Cup are not true. I had full support from him and Inzamam,” he said. “Also the talk about grouping within the side is baseless.”

He added: “When we play badly, the criticism is justified but it must be based on good reasoning.”

Speaking about the late inclusion of pacers Mohammad Amir and Wahab Riaz in the World Cup squad, Sarfaraz said: “Amir was always part of our plans, and when we realised that we need an experienced express fast-bowler, Wahab was added in the squad.”

The Karachi-born also stressed on the importance of having an experienced player like all-rounder Mohammad Hafeez, who scored 253 runs and claimed only two wickets in eight World Cup matches, in the side.

“It was important for me as a captain to use the experience of Hafeez in the top order,” he said.

While responding to a question regarding the future of his captaincy, Sarfaraz said that this decision lies with the Pakistan Cricket Board (PCB).

“My decision regarding captaincy holds no value because the PCB is supposed to make that call, although I don’t intend to step down as captain,” he said.

When asked about whether he will apologise, to the nation, considering team’s performance during the World Cup, Sarfaraz said: “I think there is no reason to apologise. We did not perform as badly as people think we did. After the below-par performance in the first five matches, we did well to finish inside top five.”

Sarfaraz also shed light on the changes in the Pakistan side, in the aftermath of the 2019 World Cup.

“In the future players will be selected on merit,” he said. “Abid Ali, Asif Ali, Ahmed Shehzad and Umar Akmal can be part of Pakistan side, based on performance.”