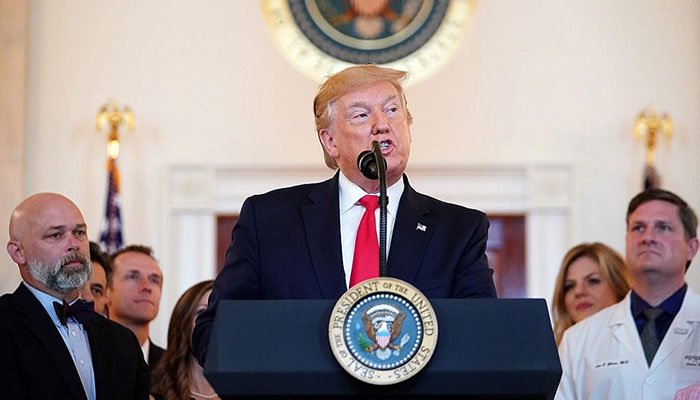 Trump’s sanctions warning — which he delivered via Twitter — came as French President Emmanuel Macron’s top diplomatic advisor met with Iran’s president, winding up a day of talks in Tehran aimed at saving a landmark 2015 nuclear deal.

The 2015 accord between Iran and world powers promised sanctions relief, economic benefits and an end to international isolation in return for stringent curbs on the Islamic republic’s nuclear program.

Tehran says it has lost patience with perceived inaction by European countries more than a year after Trump unilaterally pulled the US out of the agreement and started to impose punishing sanctions.

Tensions between Washington and Tehran have soared in recent weeks, with the United States blaming Iran for multiple attacks on tanker ships, and the Islamic republic shooting down an American surveillance drone.

On Wednesday, armed Iranian boats attempted to seize a British oil tanker but were driven off by a Royal Navy frigate, CNN reported.

The Iranians ordered the tanker, which was crossing into the Strait of Hormuz area, to change course and stop in Tehran’s nearby waters, CNN said, citing two American officials.

A US aircraft shot video of the incident, which ended when the HMS Montrose — which was escorting the tanker — trained its guns on the boats and successfully warned them to back off, the channel said.

Iran’s President Hassan Rouhani had warned Britain of unspecified “consequences” on Wednesday over the detention of one of the country’s oil tankers off Gibraltar.

The Grace 1 tanker was halted last week by police and customs officers in Gibraltar — a British overseas territory on Spain’s southern tip — with the aid of a detachment of British Royal Marines.

Iran condemned the detention as an “illegal interception,” but Gibraltar officials said that the cargo was believed to be destined for Syria, which is subject to European sanctions.

Macron’s envoy Emmanuel Bonne met with Rouhani on Wednesday, who said that Tehran had “completely kept the path of diplomacy and talks open,” according to a statement from his office.

He called on other parties to the nuclear deal to “completely implement their commitments” to keep it alive.

His mission was “to try and open the discussion space to avoid an uncontrolled escalation or even an accident,” according to French Foreign Minister Jean-Yves Le Drian.

Before meeting with Bonne, Zarif said “negotiations are never possible under pressure,” in reference to US sanctions against Iran.

Pointing to the US withdrawal from the nuclear deal, he added that the Europeans “must solve that problem.”

Bonne arrived in Tehran after Iran announced on Monday it had surpassed 4.5 per cent uranium enrichment — above the 3.67 per cent limit under the accord, though still far below the 90 per cent necessary for military purposes.

Earlier this month, it was confirmed that Iran surpassed 300 kilograms of enriched uranium reserves, another limit that was imposed by the deal.

At Washington’s request, the UN’s nuclear watchdog held a special meeting Wednesday at its Vienna headquarters.

US delegate Jackie Wolcott told the gathering that Iran was engaged in “nuclear extortion.”

Her Iranian counterpart Kazem Gharib Abadi hit back, calling it a “sad irony” that the meeting was convened at Washington’s request and claiming the current standoff was a result of the US’s “outlaw behaviour.”

After Washington withdrew from the nuclear deal in May 2018, it reimposed sanctions on Tehran, hitting the banking and oil sectors hard.

As the Iranian economy went into free fall, Tehran demanded that the other parties — especially the Europeans — deliver promised economic benefits and help it bypass the US sanctions.

However, it became clear that this was no simple task, and Iran — whose economy depends heavily on oil exports — changed tack and indicated it would reshape its policy of “strategic patience.”

In May, a year after Trump’s withdrawal, Rouhani said Iran would roll back its commitments under the deal in stages every 60 days in an effort to force the other parties to deliver on their side of the bargain.