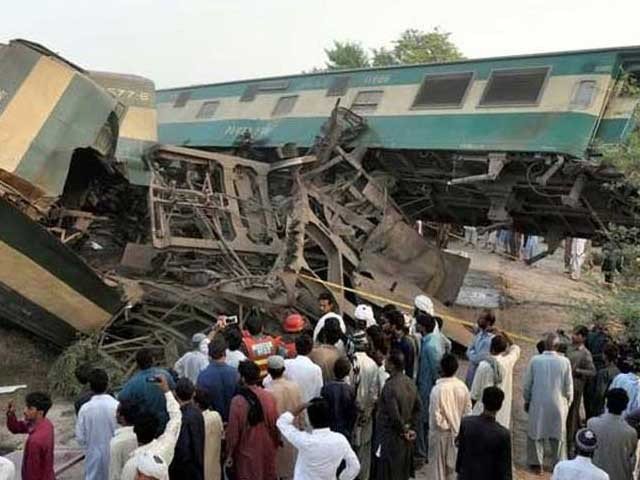 RAHIM YAR KHAN: At least 18 people were killed and 67 injured when a passenger train collided with a freight train near Sadiqabad on Thursday.

RAHIM YAR KHAN: At least 18 people were killed and 67 injured when a passenger train collided with a freight train near Sadiqabad on Thursday.

According to details, Akbar Bugti Express travelling from Lahore to Quetta collided with a stationary freight train at the Walhar Railway Station in Sadiqabad Tehsil of Punjab province.

District Police Officer (DPO) Rahim Yar Khan Umar Salamat said the deceased include one woman and eight men, while the injured include nine women and 11 children.

The injured have been shifted to Jinnah and Shaikh Zayed Hospital for treatment. An emergency has been declared at the hospitals.

A child and a man have been rescued from the train.

The DPO further said rescue operation is underway and hydraulic cutters have been called at the site to retrieve dead bodies. A control room and helpline has established.

Officials said they fear more casualties in the accident.

Eyewitness to the train accident said the accident occurred at 4am when most of the passengers were sleeping. They added, they rescued the passengers on a self-help basis from the bogies and that the rescue teams arrived at the scene of the accident till not much later.

Railways Minister Sheikh Rasheed Ahmed expressed deep grief and sorrow over the loss of lives in the accident and said the accident occurred due to negligence.

The minister added, the train accident occurred due to human error and said he has ordered an investigation into the incident.

Last month, at least three people were killed when a passenger train collided with a freight train at Makli Shah, near Hyderabad.

Jinnah Express passenger train travelling from Karachi to Lahore had collided with the stationary freight train near Latifabad area of Hyderabad, killing a driver, an assistant driver and a guard.