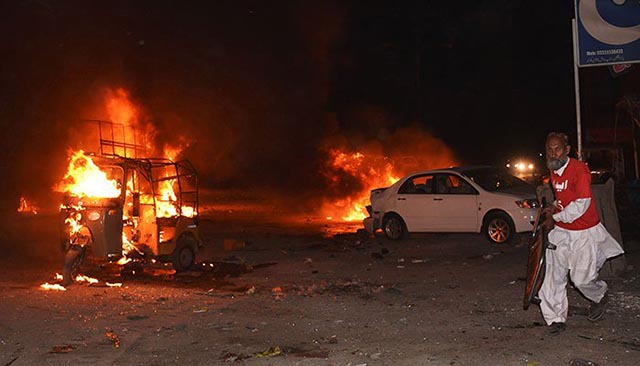 QUETTA: At Least four personnel of Rapid Response Group RRG have been killed and 11 including civilians injured after an IED blast hit police mosque at Quetta’s Satellite Town on Monday night.

QUETTA: At Least four personnel of Rapid Response Group RRG have been killed and 11 including civilians injured after an IED blast hit police mosque at Quetta’s Satellite Town on Monday night.

A heavy contingent of law enforcement agencies and rescue workers rushed to the spot while the areas was fully cordoned-off by LEAs.

The bodies and injured had been evacuated to Civil Hospital Quetta for medical procedure, “We have received four bodies all policemen in civil hospital while the injured shifted to Trauma Center.” Spokesman Civil Hospital said.

Images from the scene showed heavy destruction at the spot as many parked vehicles near mosque have been destroyed due to intensity of the blast.

“We can’t call it a security lapse because terrorists have been targeting security forces for providing security to masses.” Abdul Razzaq Cheema said.

Bomb Disposal Squad Team has revealed, at last 04kg explosive material were used in the blast.

Sources said that unknown people fixed explosive device in a motorbike and parked it near a mosque in Satellite Town area and detonated it with remote control when police pickup reached at the site.
Four soldiers of RRG who lost their lives in the blast were identified as Muhammad Ishaq, Ghulam Nabi, Mushtaq Shah and Zulfiqar Ali.

“Three police soldiers succumbed to their serious injuries in the hospital,” hospital officials said, adding that other injured were admitted in the hospital, “The condition of one of the police man is serious as he received multiple serious injuries,” a senior police officer said.
So far no group claimed responsibility of the attack but law and order situation across Balochistan turning fragile as recent uptick in violence has increase sense of insecurity among people.

The Balochistan Chief Minister has strongly condemned the blast in which police was targeted. He said that such blasts could not down the moral of the government and security forces. He said that government and security forces will continue action against terrorists and their facilitators.
He directed law enforcement agencies to take all possible steps against terrorists and bring them to the justice. He expressed sympathies with the families of the martyred police personnel and said that their sacrifices would not be forgets as they lost their lives in the line of duty.