Citing Lack of training among Journalist 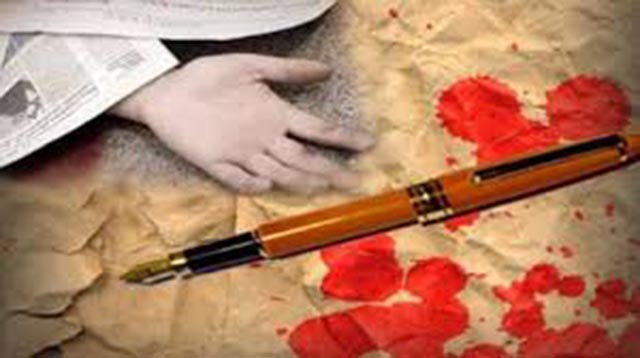 Being responsible is the backbone of journalism, but the Pakistani media lack this aspect, in Balochistan majority of the journalist have martyred and killed. While doing their duty, most significant reason of that is lack of training and the race of “Breaking news”. These heroes have left their loved one behind themselves who are still feeling void of their father, son, brother or husband.

Being responsible is the backbone of journalism, but the Pakistani media lack this aspect, in Balochistan majority of the journalist have martyred and killed. While doing their duty, most significant reason of that is lack of training and the race of “Breaking news”. These heroes have left their loved one behind themselves who are still feeling void of their father, son, brother or husband.

Malik Muhammad Arif senior cameraman Pakistan television Quetta center, soon after his retirement he joined Samaa Tv Network a private news channel in Pakistan. He met his faith in a horrendous blast. The news of my father is been martyred was given to me by my close friend at that time I was in a train traveling to Lahore Said Mudasir Malik son of Malik Muhammad arif.I was not able to understand anything I was taken aback.

After my father had left this world, we shifted to Islamabad and faced all difficulties which one cannot imagine. We had our own house now we are living in a rented house and there is a lot debt which we have taken.

I believe one of the reasons of my father’s martyrdom was lack of training. Police of Quetta city are also not very happy with the journalist working on crime one of the SHO Abid bukhari says no journalist don’t take care on the crime scene they are always in a hurry, mostly they lose their lives because of their own haste.

But in the race of breaking news how a journalist can avoid to break the news before any other channel their is agreement between them and organization that they well work so the organization will pay them salary.

Senior journalist and Bureau chief of Samma T.V Jalal noorzai thinks Balochistan has remained an area of insurgency and terrorism which is the fundamental reason so it is very oblivious that a journalist has to work in these circumstances he has to write on the issues and speak on them.

There are several reasons of journalists killed they have became a target of terrorism and at the same time while work they have also been victim of bomb blasts.These are the few reasons in which numerous journalist have died and there are also a few who have abandoned this province to seek sanctuary in some other provinces of the country. Replying to the question of breaking news he said,

I don’t think the reason is breaking news accepting that there is difficulty and censorship but the biggest reason is we have long remain in a belligerent situation where the peace situation was very bad. And when there are different factions fighting against state and its interest and it is also new eras of journalists when they have to speak boldly and there were also groups who were wearing garb of patriotism journalist were also target of them. Quetta’s journalists of print and electronic media have been martyred while performing their duties.

One of the eyewitness and volunteer of Edhi has something different to say on this issue Ali dehwar has been working for
Edhi since last five years he says that Ali dehwar Edhi volunteer working for last five years, journalist work on the crime scene patiently and they maintain a distance from the crime scene they stay very cooperative with us as it is situation of doom’s day when blast happens in any area of the city we also stay busy to shift the injured and dead to the hospital but journalist work very carefully on the crime scene.

This is very secure to safe their lives journalist needs to apply SOPs (Standarization of policy) and plans which they have decided among themselves so that they and their team remain safe. At the same time the organization which for they are working also to need to give them constant precautions before the leave the office for coverage. This is the only way a journalist can report issues in insurgent areas of Balochistan without receiving any injury.