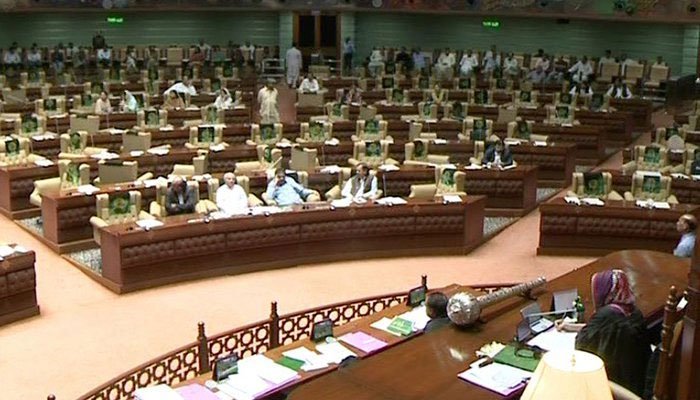 verbal and physical attacks at each other on Friday after the latter were not given permission to speak on recent spike in HIV positive cases in Larkana.

verbal and physical attacks at each other on Friday after the latter were not given permission to speak on recent spike in HIV positive cases in Larkana.

Pakistan Tehreek-e-Insaf’s Haleem Adil Sheikh sought Speaker Agha Siraj Durrani’s permission to begin debate on the issue, but the latter did not allow the MPA asking him to table the resolution after completion of the assembly’s proceedings.

When Sheikh protested against the speaker’s decision, saying that he had made a habit of stopping the opposition members from using the assembly’s floor, the Pakistan People Party (PPP) leader rebuked, asking him to speak politely.

This led opposition benches to lodge a protest demonstration in the provincial assembly. They chanted slogans while displaying placards against the government.

They also attempted to mount on the speaker’s rostrum after surrounding his dais, however, the treasury benches members prevented it from happening. During the tussle, Haleem Adil Sheikh and PPP’s Mumtaz Jakhrani threw fists and punches at each other. The two sides also exchanged harsh words.

Over 520 people, many of them children, have tested HIV positive in recent weeks in Larkana’s Ratodero as experts warn of a surge in infection rate across the country, due to the use of unsanitary equipment and rampant malpractice — often at the hands of quack doctors.

Anger and fear continue to swell in the desperately poor village hit hard by the epidemic, which authorities say, could be linked to either gross negligence or malicious intent by a local pediatrician.

With about 20,000 new HIV infections reported in 2017 alone, Pakistan currently has the second fastest growing HIV rates across Asia, according to the UN.