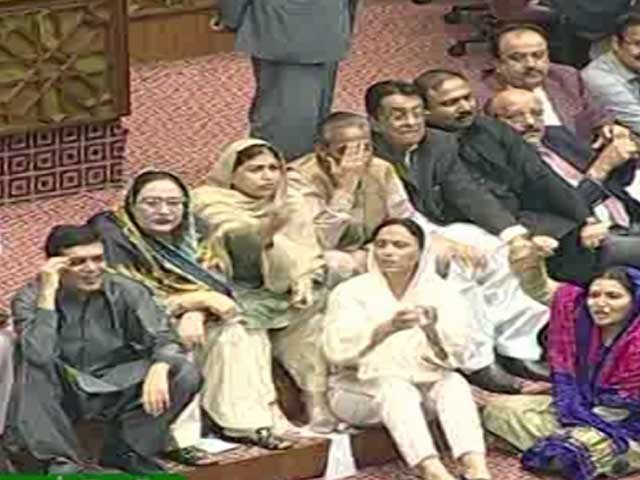 ISLAMABAD: Opposition parties on Tuesday staged protest during the session of National Assembly and tore copies of the agenda.

ISLAMABAD: Opposition parties on Tuesday staged protest during the session of National Assembly and tore copies of the agenda.

During the speech of Pakistan Tehreek-e-Insaf (PTI) leader Murad Saeed, the opposition chanted ‘no baby no’ slogans and surrounded the dais of the speaker.

The PTI MNA said that opposition doesn’t have courage to listen him as he is unveiling the truth. He criticized Pakistan Peoples Party (PPP) Chairman Bilawal Bhutto and alleged him of fighting India’s case.

Murad Saeed said opposition parties are making hue and cry against the accountability process. He said under the dynamic leadership of Prime Minister Imran Khan, the country’s image has improved significantly and it has come out of isolation.

The MNA further said that minor girl Nashwa lost her life due to wrong injection but no action has been taken so far.

He termed Imran Khan’s comment ‘dangerous’ and maintained that the premier gave a similar statement in an interview to the New York Times. “I demand prime minister to give explanation to the House over his remarks. I am not labeling Imran Khan as traitor or Modi’s friend,” he said.

PTI MNA and Minister for Human Rights Shireen Mazari affirmed that banned outfits from both sides of the border must be eliminated in order to wipe out terrorism.

“Discussions were held to launch operation against terrorism for the first time between Pakistan and Iran,” she stressed.

Earlier, a rumpus broke out in the NA when PPP Chairman Bilawal Bhutto Zardarilashed out at the government and called PM as selected, incompetent and incapable.

He questioned why former finance minister Asad Umar and former information minister Fawad Chaudhry were removed from their posts.

Speaker NA Asad Qaiser interrupted Bilawal’s speech when the PPP chairman said that if he was not allowed to speak, we will not even let Imran Khan enter into parliament house and said the prime minister was elected by the assembly.