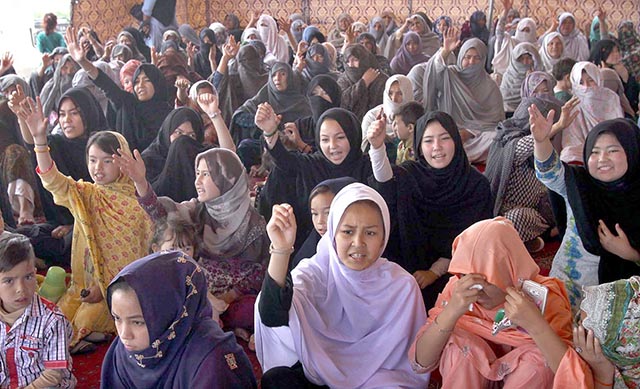 QUETTA: Despite pouring rain in Quetta valley, the Hazara community’s sit-in entered its third day at western bypass against Hazar Ganji Blast which killed 20 people including 10 members of ethnic Hazaras.

The protesters who now joined by Majlis Wahda ul Muslimeen on Sunday demanding Prime Minister Imran Khan to come to Quetta and assured them that National Action Plan would be fully implemented across the country against armed groups targeting innocent people.

The protesters have blocked the western bypass area of Quetta for 3rd consecutive days as members of Hazara community including women and children sitting in torrential rain demanding security for the community which lost more than 500 people in last two decades.

In the latest attack against the community left 20 people killed majority Hazaras in Quetta’s Hazar Ganji vegetable Market on Friday morning after a suicidal ripped through from a group of Hazara people.

Despite provincial government numerous talks with protesters they refused to end sit-in unless Federal Government didn’t give them surety that terrorist attacks won’t be repeated against Hazara community.

“We were forced to live in barricaded areas of Hazara Town and Marriabad because right of free ling has been snatched from us, we don’t have access of education and health as we can’t move freely in the city.” Zahra a protesting girl said.

Calling the Prime Minister to visit Quetta and give Hazaras surety she said, being a Christian woman New Zealand’s Prime Minister Jacinda Ardern visited Muslim’s worship place and stood with the community stricken by a terrorist,

“Ironically despite living in Muslim state our Prime Minister was not able to come here and heal the wounds of Hazara community, he announced to make Pakistan as like as Madina State.” Zahra said added we won’t end our protest until PM didn’t come here.

Majlis Wahdat-ul-Muslimeen also joint hand with the hazara protestors and announced to support their demands.

The leader of protesters, Tahir Hazara advocate expressed his dismay attitude of the federal government and said that prime minister has no time to visit Quetta after tragic incident of Hazarganji.

He said that provincial government has failed to protect lives of the community as terrorists were continuously targeting our people in Quetta. “We have lost hundreds o our loved once during last 10 years.” he said, adding that National Action Plan prepared jointly by the members of the parliament but many points of the plan was not implemented that resulting in conducting such terrorist attacks.
“Prime Minister Imran Khan should ensure full implementation on the National Action Plan.” Protestors chanted slogans during sit-in. The provincial authorities contacted leaders of the protestors and assured implementation on National Action Plan but they protestors refused to end their sit-in.

He said that no one is safe in Quetta, with ordinary masses security personnel have also been martyred which raises question on the capabilities of the government. He said that the state must have to react now because we are tired of lifting the coffins of our loved ones.