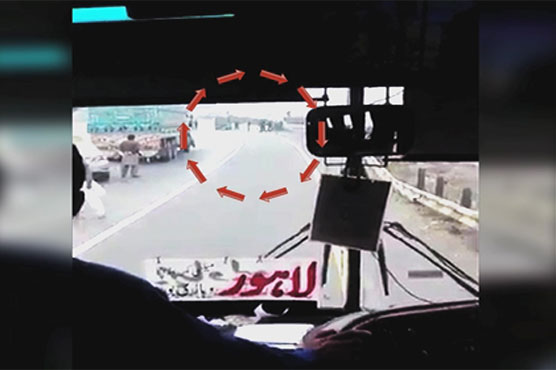 Meanwhile, the officers refused that they had opened fire on the car ‘first’ and they shot at the car in retaliation.

Responding to JIT’s question that how did four people die in the car, officers said that they were killed in firing by their accomplices who were on a motorcycle.

“Nobody ordered us, we only fired in retaliation,” the officials added.

On the other hand, the JIT has found substantial evidences about the car which was being used by Zeeshan, who CTD officials had been accusing of having links with Islamic State (IS) or Daesh militant organisation.

According to sources, the car was owned by Adeel Hafeez who was shot dead in Faisalabad.

Furthermore, the JIT has gathered statements of previous owners of the car and critical documents which could assist the investigation process.

Moreover, eight eyewitnesses of the incident have been included in the investigation and statement of former CTD senior superintendent of police (SSP) Jawad Qamar has been recorded.

The CTD spokesperson had identified one of them, Zeeshan, as an active member of the banned outfit, explaining that the terrorists used to travel with families to avoid police checking.

On Tuesday, Senate Standing Committee on Interior Chairman Rehman Malik categorically rejected the JIT formed by the government to probe into the incident, and asserted to hold a judicial inquiry to probe into the killing of the three members of the same family and their friend in an alleged encounter by the Counter-Terrorism Department (CTD) in Sahiwal.

The parliamentary panel met Senator Rehman Malik while relatives of the victims, including Khalil’s brothers and Zeeshan’s mother, appeared before the panel to record their statements.

“Why the government is not appointing a judicial commission to probe into the incident,” questioned Malik.

Mother of Zeeshan, who allegedly had links with a banned outfit, told the committee that her son was not a terrorist.

“Why Zeeshan was not arrested alive, if an Indian terrorist Kulbhushan Jadhav could be arrested alive. We are not satisfied with the JIT’s investigation,” she said.

Earlier, the Punjab government had acknowledged that the “method of encounter” followed by the CTD in Sahiwal was ‘wrong’ and the officers should have inspected the vehicle before such an action.