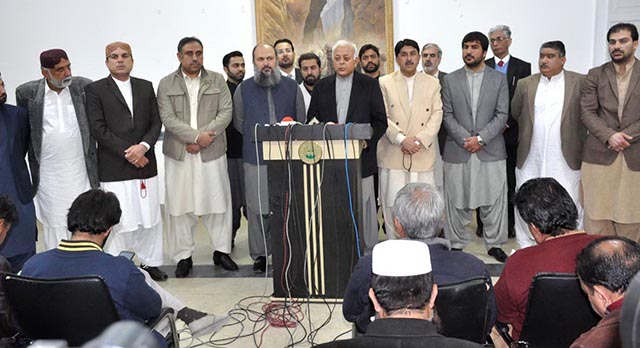 QUETTA: Federal Minister for Petroleum Ghulam Sarwar Khan has pledged on Friday that we have decided to establish committees for Gas reservoirs in Balochistan adding first time Balochistan has been getting representation in Board of Directors for Oil and Gas Companies.

QUETTA: Federal Minister for Petroleum Ghulam Sarwar Khan has pledged on Friday that we have decided to establish committees for Gas reservoirs in Balochistan adding first time Balochistan has been getting representation in Board of Directors for Oil and Gas Companies.

“Balochistan didn’t get membership in Petroleum Companies but over the directives of Prime Minister Imran Khan I have been meeting provincial leaderships of all four provinces to hear their reservations over natural oil and gas share.” Federal Minister for Petroleum Ghulam Sarwar Khan said while addressing a news conference with CM Balochistan announcing new exploration process all over the country.

He added, first time our government has decided to induct representatives from Balochistan in Board of Directors of all companies in Petroleum Division because with irony the gas and oil rich province didn’t get chance to be part of in the tops slot of oil and gas companies.

“In democracy we must have to listen all sides and during meeting with Chief Minister Balochistan we discussed provincial share in oil and gas production and other issues.” Ghulam Sarwar said adding 26 tenders of LPG mix plants being issued in Balochistan’s cold areas.

Replying to query regarding Saudi Arabia’s induction in CPEC Federal Minister said we don’t have any reservations over making Saudis as third partners in CPEC adding the federal government taking on board provincial regarding all major decision on CPEC,

“Saudi Minister for Petroleum has been visiting Gwadar today (Saturday) and the Crown Prince of Kingdom was expected to visit Pakistan in next month indeed bilateral agreements would be signed over his visit in Petroleum sector.”

Slamming PML N and PPP for harming the country Federal Minister said, give and take policy is a beauty of democracy but country’s two political parties (PPP and PML N) have destroyed the economy and we can’t pursue policy of give and take with them,

“We haven’t received the written judgement of Supreme Court regarding removal of Bilawla Bhutto’s name from ECL, we didn’t take serious the statement of Sindh regarding ban on some Federal Minister because no one can ban anyone in Pakistan.”

“NAB and Supreme Court have been working independently in their jurisdiction and we also present ourselves for accountability.” Ghulam Sarwar said adding Whether Aleema Khan or anyone else involved in corruption can’t escape.