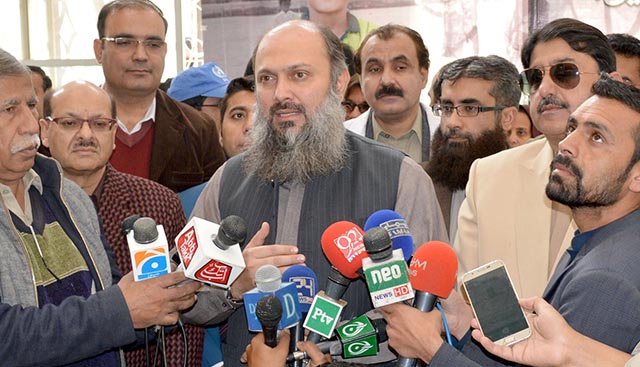 QUETTA: Al tough Balochistan has been facing myriad of issues but Health sector remained most important for incumbent provincial government, not 100% but at some points things in health department getting better with span of time, said Chief Minister Jam Kamal.

“ Tough Civil Hospital has been providing health facilities to major population of Balochistan but we have taking measure to appease the burden on Civil Hospital by functionalizing Hospitals in Quetta’s outskirts particularly Sheikh Zahid Hospital.” Jam Kamal said.

Replying to query regarding drought in Balochistan CM Balochistan said, unfortunately we have propagating of CPEC but Balochistan didn’t get major share of China’s multi-billion dollars investment  adding Gawadar Port facility and coal power plant not imparting direct relief to the public,

“In last five years we should have been built water projects, infrastructure, educational projects, health projects in CPEC which was the true face of China-Pakistan Economic Corridor.”

“We have picked-up unapproved mass-transit train project cost of 100 billion rupees which would impart transportation to the citizens in the jurisdiction of 27km.”

He added, Provincial Disaster Management Authority has started relief operation in drought hit areas of Balochistan and asked Federal Government’s assistance in written, “Campaign against illegal tube-wells and water connection continued while 30 to 40 bores of WASA were being functionalized to control water issues.”

Responding to another query regarding Joint Corporation Committee Session (JCC) CM Jam Kamal said, we have categorically told the Federal Government that we are not fond of visiting China for just fun adding if center want to induct Balochistan in JCC then they have to take seriously our priorities.

“There is a question mark regarding 25 billion dollars’ investment in Pakistan in which Balochistan didn’t get public development schemes of rupees 2 billion dollars.” Jam Kamal said adding the previous governments in Balochistan fooled masses on the lollypop of CPEC.

Vowing to clinch due share of public schemes for Balochistan Jam Kamal said, we have discusses Prime Minister regarding Balochistan’s grievances and he assured that Balochistan would be provided its due share in all major development schemes.